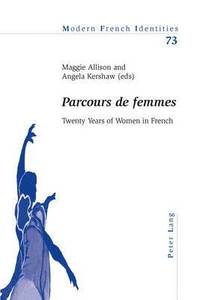 Twenty Years of Women in French

av Maggie Allison, Angela Kershaw
Häftad Engelska, 2011-06-16
599
Köp
Spara som favorit
Skickas inom 3-6 vardagar.
Fri frakt inom Sverige för privatpersoner.
This collection of essays celebrates twenty years of Women in French, a network of female academics working in the discipline of French Studies. Based on papers delivered at the group's tenth biennial conference in Leeds, which was entitled 'Le parcours', the volume investigates the theme of trajectories in French and Francophone women's lives and writings. The book begins with consideration of the ways in which traces of women's lives, experiences and texts are conserved in archives and communicated to new generations of readers through the practice of women's biography. It then addresses the presence of women in public spaces such as journalism, politics and the street. The volume goes on to examine women's representations in literary space and their use of imaginative writing to depict, interrogate and transform their life trajectories. It considers women's movements through geographical space, looking at the intersections between gender and travel. With the inclusion of essays from a range of disciplinary perspectives, the volume highlights the variety of French and Francophone women's contributions to society, culture and politics as well as celebrating the diversity of women's contributions to the discipline of French Studies in the United Kingdom, Canada, Australia and Europe.
Visa hela texten

Maggie Allison is Honorary Visiting Senior Lecturer in French Studies at the University of Bradford. Her research and publications in gender and media in France cover journalism, the women's press, sexual harassment and the role of women in politics. She has also published, in collaboration with Sheila Perry, on the televised debats participatifs broadcast prior to the 2007 French presidential elections, focusing on representations of diversity and gender. Angela Kershaw is Senior Lecturer in French Studies at the University of Birmingham. Her research focuses on literature and culture of the interwar period and the Second World War in France. She is the author of Forgotten Engagements: Women, Literature and the Left in 1930s France (2007) and Before Auschwitz: Irene Nemirovsky and the Cultural Landscape of Inter-war France (2010).