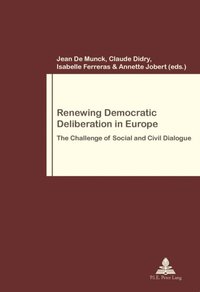 The Challenge of Social and Civil Dialogue

av De Munck Jean De Munck, Didry Claude Didry, Ferreras Isabelle Ferreras, Jobert Annette Jobert
E-bok (PDF - DRM), Engelska, 2012-07-02
379
Ladda ned
Spara som favorit
Laddas ned direkt
Läs i vår app för iPhone, iPad och Android
Democracy is not merely a political and legal system; it depends on social and economic commitments as well. Democracy is not only realized through elections; it requires civic participation through permanent dialogue. This volume addresses this central, yet often overlooked, issue in a series of essays by renowned scholars from Europe and the United States, reviving a concept that dates back to the foundation of the European Union: social dialogue as a fundamental part of the construction of the union. Having neglected the social dimensions of its institutions, the European Union is currently in deep crisis. European democracy is confronted with a radical new situation and new definitions of work and family, as well as of growth and economic achievement, must be embedded in European public policy. The contributors to this book identify social and civil dialogue as key institutional processes that will help overcome the current crisis. Civic participation can no longer be limited to representative institutions as we know them; a new combination of deliberation, bargaining and social experimentation is required. This book maps out the complexity of this vital issue and its implications for the future of the European democratic project.
Visa hela texten