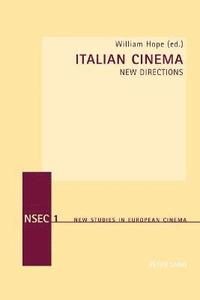 av Wendy Everett, William Hope, Axel Goodbody
Häftad Engelska, 2004-11-01
699
Köp
Spara som favorit
Skickas inom 5-8 vardagar.
Fri frakt inom Sverige för privatpersoner.
Kan levereras innan jul!
Italian cinema currently finds itself in a transitional phase after a highly successful period in which it was associated with the work of directors such as Rossellini, Visconti, Fellini, and Pasolini, and with innovative styles of film-making, principally neorealism. This book explores the evolution of Italian cinema over the last twenty years, with particular reference to modern masterpieces such as Tornatore's Oscar-winning Nuovo Cinema Paradiso. The volume focuses on the work of some of the most prominent directors of recent times, combining an auteurist perspective with an incisive overview of the most important thematic and stylistic developments in modern Italian film-making. A broad range of theoretical approaches has been selected, embracing cognitive, aesthetic, psychoanalytical, and sociological perspectives. This approach has been adopted with a view to providing the most illuminating analyses of the radically diverse work of different directors, rather than attempting to impose a single critical perspective or theme upon films that range from social realism to horror. Significantly, these different approaches are complemented by detailed discussions of the technical arrangements of given film sequences, since another of the volume's aims is to encourage a greater familiarity with the effects of mise-en-scene, montage, sound, and camera movement.
Visa hela texten