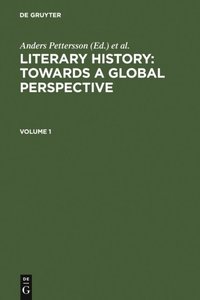 av Anders Pettersson, Gunilla Lindberg-Wada, Margareta Petersson, Stefan Helgesson
E-bok (PDF - DRM), Engelska, 2011-12-22
5204
Ladda ned
Spara som favorit
Ladda ned och läs i en e-boksläsare. Tips på appar
Literary History: Towards a Global Perspective is a research project funded by the Swedish Research Council (Vetenskapsrdet). Initiated in 1996 and launched in 1999, it aims at finding suitable methods and approaches for studying and analysing literature globally, emphasizing the comparative and intercultural aspect.Even though we nowadays have fast and easy access to any kind of information on literature and literary history, we encounter, more than ever, the difficulty of finding a credible overall perspective on world literary history. Until today, literary cultures and traditions have usually been studied separately, each field using its own principles and methods. Even the conceptual basis itself varies from section to section and the genre concepts employed are not mutually compatible. As a consequence, it is very difficult, if not impossible, for the interested layperson as well as for the professional student, to gain a clear and fair perspective both on the literary traditions of other peoples and on one's own traditions.The project can be considered as a contribution to gradually removing this problem and helping to gain a better understanding of literature and literary history by means of a concerted empirical research and deeper conceptual reflection. The contributions to the four volumes are written in English by specialists from a large number of disciplines, primarily from the fields of comparative literature, Oriental studies and African studies in Sweden. All of the literary texts discussed in the articles are in the original language. Each one of the four volumes is devoted to a special research topic.
Visa hela texten