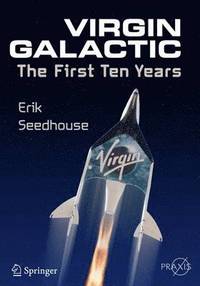 av Erik Seedhouse
Häftad Engelska, 2015-02-24
379
Köp
Spara som favorit
Skickas inom 5-8 vardagar.
Fri frakt inom Sverige för privatpersoner.
Thirty years ago when Sir Richard Branson called up Boeing and asked if they had a spare 747, few would have predicted the brash entrepreneur would so radically transform the placid business of air travel. But today, Branson flies airlines on six continents, employs hundreds of jets and, in 2014, was predicting that his spaceship company - Virgin Galactic - would soon open the space frontier to commercial astronauts, payload specialists, scientists and space tourists. With more than 600 seats sold at $250,000 each, what started off as a dream to send people just for the excitement to look back and marvel at Earth, was on the cusp of finally being turned into a business. Then, on October 21, 2014, tragedy struck. SpaceShipTwo was on its most ambitious test flight to date. Seconds after firing its engine, Virgin Galactic's spaceship was breaking through the sound barrier. In just the three seconds that it took for the vehicle to climb from Mach 0.94 to Mach 1.02, co-pilot Mike Alsbury made what many close to the event believe was a fatal mistake that led to his death and the disintegration of SpaceShipTwo. Miraculously, the pilot, Peter Siebold, survived the 16-km fall back to Earth. Soon after the event Branson vowed to continue his space tourism venture in spite of this. Already a second SpaceShipTwo is being built, and ticket-holders eagerly await the day when Virgin Galactic offers quick, routine and affordable access to the edge of space. This book explains the hurdles Virgin Galactic had and still has to overcome en route to developing suborbital space travel as a profitable economic entity, and describes the missions that will be flown on board SpaceShipTwo Mk II, including high-altitude science studies, astronomy, life sciences, and microgravity physics.
Visa hela texten

Dr. Erik Seedhouse worked as Astronaut Training Consultant for Bigelow Aerospace in 2005, a company for whom he wrote the Spaceflight Participants Flight Surgeon's Manual. He also developed astronaut-training protocols for future spaceflight participants and wrote and edited several chapters of Bigelow Aerospace's Astronaut Training Manual. Erik is a research scientist specializing in environmental life sciences and physiology, the subject in which he obtained his Ph.D. in Physiology while working for the European Space Agency between 1996 and 1998. In 2009, he was one of the final candidates for selection as an astronaut in the CSA's Astronaut Recruitment Campaign. He is a certified commercial suborbital astronaut who will fly a payload mission in 2015. He is also Training Director for Astronauts for Hire and, between 2008 and 2013, served as Director of Canada's manned centrifuge and hypobaric operations.