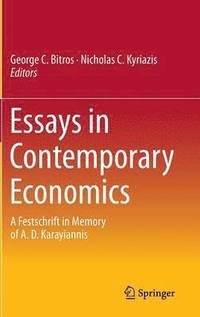 A Festschrift in Memory of A. D. Karayiannis

av George C Bitros, Nicholas C Kyriazis
Inbunden Engelska, 2014-11-28
1259
Köp
Spara som favorit
Skickas inom 3-6 vardagar.
Fri frakt inom Sverige för privatpersoner.
Finns även som
Visa alla 2 format & utgåvor
This book is a collection of original essays grouped into four parts under the headings "Greece and European integration," "Issues in the Methodology of Economics," "Institutions and the Free Market Economy," and "Insights for Today from Ancient Greece." The essays appeal to both researchers in the corresponding fields of knowledge and also to policy makers who are looking for ideas and approaches to confront present day challenges. In particular, given the present state of turmoil in the European Union, the international economy, and democracies in general, most of the essays offer new insights for economic and social policies.
Visa hela texten

George C. Bitros obtained his Ph.D. in economics from New York University in 1972 and stayed on for teaching and research until 1976. In that year he returned to Greece in the position of Senior Research Associate in the Bank of Greece and three years later he moved on to the Athens University of Economics and Business where he served as Professor of Economics until his retirement in 2007. He has published extensively in major scholarly journals, served as research associate in the National Bureau of Economic Research (USA), held advisory posts in government, government commissions and major business concerns, and he referees for several international journals. Nicholas Kyriazis holds a Ph. D. in Economics from the University of Bonn, Germany. He has been a visiting Professor at Harvard and Trier Universities and is currently Professor and Chairman at the Economics Department, University of Thessaly, Greece. He held several business positions such as at the Directorate General for Research of the European Parliament or as consultant for the Greek Command, Control, Communications, Computers and Military intelligence. He also worked as an advisor for several government organizations: for the National Bank of Greece, the Minister of Finance and Secretary General of Public Administration and for the Hellenic Minister of Defense. Currently Kyriazis is chairman of the board of Alpha-Trust-Andromeda Investment Fund, Vice President of Ergoman Telecommunications, Vice President of "Black Orange" and the President of the "Kostas Kyriazis" foundation. He has published several papers in international academic journals on institutional issues and on various aspects of direct democracy and 5 books on economics and strategy. He is also one of Greece's well known novelists. In 2005 the President of the French Republic honored him with France's highest decoration, the Knight of the Legion of Honour (Chevalier de la Legion d' Honneur) for his contribution to the European integration of the EMU. He is currently Chairman of the Economics Department, University of Thessaly, Greece.