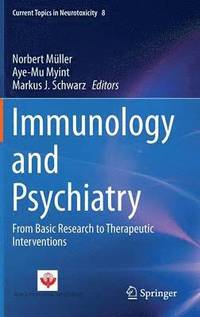 From Basic Research to Therapeutic Interventions

av Norbert Muller, Aye-Mu Myint, Markus J Schwarz
Inbunden Engelska, 2015-04-20
1819
Köp
Spara som favorit
Skickas inom 5-8 vardagar.
Fri frakt inom Sverige för privatpersoner.
Finns även som
Visa alla 1 format & utgåvor
Psychiatric disorders are one of the most dramatic burdens for humankind. The role of immune dysfunction in the pathophysiology of these disorders has emerged during the last years, because there has been tremendous progress in psychoneuroimmunological research. Many results are presented here by pioneers in the field. The book addresses various effects of the immune system on the pathophysiology and course of psychiatric disorders and highlights the possible future impact on treatment decisions of various psychiatric disorders, including schizophrenia and depression. The contributions cover the role of in utero immune challenges on the development of schizophrenia, the role of infections, and autoimmune diseases and mild immune activation in the development of depression and schizophrenia, the influence of immune responses in other disorders such as Tourette's, Alzheimer's, and OCD, the connections between mental and physical pain as well as between anti-inflammatory and antipsychotic drugs.
Visa hela texten

"The editors and authors have produced an excellent, thought-provoking book. The primary audience includes psychiatrists, researchers in immunology and psychiatry, and anyone interested in the immunological contributions to psychopathology. ... This is an excellent book on an emerging and important area in psychiatry: the role of the immune system. Written and edited by internationally recognized experts, it is a welcome addition to the literature. I highly recommend it." (Michael Joel Schrift, Doody's Book Reviews, September, 2015)

After studies of psychology and medicine Dr. Norbert Muller was trained in psychiatry, psychotherapy and neurology at the University Hospital of the Ludwig-Maximilians-University in Munich. He did research in the field of psychoneuroimmunology since 1983, primarily in schizophrenia, affective disorders and Tourette's syndrome. The research focused on pathophysiological aspects and on therapy with anti-inflammatory compounds. Since 2000 he is Professor of Psychiatry, currently vice-chair of the hospital and department of Psychiatry and Psychotherapy, LMU Munich. He was president of the German Society of Biological Psychiatry and member of the executive committee und treasurer World Federation of Societies of Biological Psychiatry (WFSBP), since 2006 he was chair of the section "Immunology in Psychiatry" of the World Psychiatric Association (WPA). He won several honours and scientific awards including the Emil-Kraepelin Research Award. Dr. Aye Mu Myint is a Medical Doctor and obtained her Ph.D. in Neuroscience from the University of Maasrticht, The Netherlands and has done Habilitation in Experimental Psychiatry at Magdeburg University, Germany. She is working as visiting scientist at Ludwig-Maximillian University Munich, Germany since 2007 and as well as senior research scientist at Advanced Practical Diagnostics bvba (apDia), Belgium since 2006. She is also an honorary assistant professor at the School for Mental Health and Neuroscience from Maastricht University. In 2003, she proposed the "neurodegeneration" hypothesis explaining the neurotoxic changes induced through the involvement of immune system imbalance and imbalance of the kynurenine metabolites beyond the activity of tryptophan pathway. She is one of the leading scientists in the field of neuroscience and psychiatry, and is working on major psychiatric disorders, depression-dementia link, psychoneuroimmunology, kynurenine pathway, and related neuroendocrinology in clinical settings as well as animal and in vitro models of depression, schizophrenia, and neurodegenerative disease. She is also involved in antibodies and immunoassay developments through EU consortia. Outside the EU consortium, she has collaborations with several universities including the University of New South Wales, Australia, and the Universities of Chicago, Illinois, and John Hopkins of the United States. Markus Schwarz studied Medicine in Munich from 1990 to 1996. After finishing his dissertation on autoimmune mechanisms in schizophrenia, he started his research career and received his habilitation (venia legendi) in Experimental Psychiatry in 2005. From 2004 to 2012 he was head of the laboratory section "PsychoNeuroImmunology and Therapeutic Drug Monitoring" at the Psychiatric Hospital of Munich University. Since 2012 he is head of the research group on Neurobiochemistry at the Institute for Laboratory Medicine of Munich University. His main research interests are the impact of the two main metabolism pathways of tryptophan (serotonin and kynurenine) in psychiatric disorders, immunological investigations to identify a distinct subgroup of schizophrenia with immune-related pathogenesis, basic psychoneuroimmunologic research on the crosstalk between neurotransmitter and cytokine system and role of therapeutic drug monitoring for enhancing efficacy and safety in psychopharmacotherapy. He published more than 130 research articles in international peer reviewed journals.