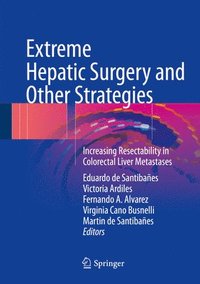 Extreme Hepatic Surgery and Other Strategies

av Eduardo De Santibanes, Martin De Santibanes, Victoria Ardiles, Fernando Alvarez, Virginia Cano Busnelli
Inbunden Engelska, 2017-08-14
2359
Köp
Spara som favorit
Skickas inom 5-8 vardagar.
Fri frakt inom Sverige för privatpersoner.
Finns även som
Visa alla 2 format & utgåvor
This book describes the diagnoses; staging and management of patients with colorectal liver metastases initially considered unresectable and portrays the different strategies to increase resectability along with their tactics and tricks. Colorectal carcinoma is the third most commonly diagnosed cancer in the world and according to recent cancer statistics around 1.23 million patients are diagnosed each year. Of these patients, approximately 50% will develop liver metastases during the course of their disease and around 15-25% are found to have stage IV disease at diagnosis. Liver resection has been recognized as the treatment of choice for these patients, offering overall 5-year survival rates of up to 50-60% and the only hope for cure. However, at diagnosis only 10-20% of these patients are possibly amenable to surgical resection with curative intent. The possibility to achieve an R0 resection is many times limited by the amount and quality of the future liver remnant (FLR), being posthepatectomy liver failure (PHLF) the most feared and severe complication after major liver resections. With the years, diverse strategies have been developed with the intention to increase resectability by increasing the future liver remnant and/or reducing tumor size, e.g. ALPPS. Along with these techniques, associated surgeries are developed including multivisceral resections, which broadens even more the resectability for patients.
Visa hela texten

"This book is devoted to difficult problems in hepatic resection for colorectal metastatic disease. It is an attempt to bring together, in a series of chapters, a lot of information about the current status of liver resection (including transplantation) and apply it to this common problem. ... It is most likely to be of use to specialists, who may find in its pages additional information or guidance on specific complex problems and techniques." (Carol Scott-Conner, Doody's Book Reviews, October, 2017)