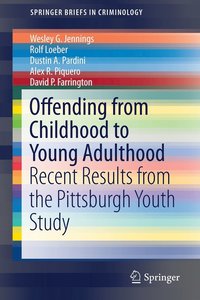 Offending from Childhood to Young Adulthood

av Wesley G Jennings, Rolf Loeber, Dustin A Pardini, Alex R Piquero, David P Farrington
Häftad Engelska, 2015-12-25
709
Köp
Spara som favorit
Skickas inom 10-15 vardagar.
Fri frakt inom Sverige för privatpersoner.
Finns även som
Visa alla 1 format & utgåvor
This Brief examines criminal careers by providing the most extensive and comprehensive investigation to date on the official offending, self-reported offending, and trajectories of offending of the Pittsburgh Youth Study (PYS) participants. The PYS is a longitudinal study, which was initiated in 1987, and involves repeated follow-ups on several community cohorts (starting in grades 1, 4, and 7) of inner-city boys in Pittsburgh, Pennsylvania. This Brief covers the Youngest and Oldest PYS cohorts (which had the most follow-up and most data available) from ages 10-30. It provides the most complete descriptive analyses of the criminal careers of these males to date. The three cohorts are commonly referred to as the Youngest, Middle, and Oldest cohorts, respectively. Consistent with several prior publications with the PYS data (Loeber et al., 2008), this book focuses only on data from the Youngest and Oldest cohorts as these cohorts were followed up the most frequently and have the longest time window of data available. It will be of interest to researchers in Criminology and Criminal Justice, as well as related fields like Sociology, Developmental Psychology, Social Policy, and Education.
Visa hela texten

"Offending from Childhood to Young Adulthood: Recent Research from the Pittsburgh Youth Study presents a major study of crime in Pittsburgh over several years ... . chapters are educational and important. ... This book would be most helpful to those concerned with data on crime. ... the massive data and the use of self-reports vs. official reports help us understand the course of crime over time (longitudinally) and thus makes a real contribution to understanding the complexity of criminal behavior." (Russell Eisenman, PsycCRITIQUES, Vol. 61 (44), October, 2016) "Offending from Childhood to Young Adulthood provides a valuable account of the association between kids' offending and the duration. ... This book is significant, as authors combine multiple comparisons to give deep insights to age difference and offenses. It also an excellent work for researchers, policy makers, criminology and sociology." (Yiyan Li, Canadian Graduate Journal of Sociology and Criminology, Vol. 5 (1), 2016)

Wesley G. Jennings, Ph.D. is Associate Professor, Associate Chair, and Undergraduate Director in the Department of Criminology, has a Courtesy Appointment in the Department of Mental Health Law and Policy, and is a Faculty Affiliate of the Florida Mental Health Institute in the College of Behavioral and Community Sciences at the University of South Florida. In addition, he also has a Courtesy Appointment in the Department of Health Outcomes & Policy and is a Faculty Affiliate of the Institute for Child Health Policy in the College of Medicine at the University of Florida. He received his doctorate degree in criminology from the University of Florida. Rolf Loeber, Ph.D., is Distinguished University Professor of Psychiatry, and Professor of Psychology, and Epidemiology at the University of Pittsburgh, Pittsburgh, Pennsylvania. He is Director of the Life History Program and is the initiator of two large longitudinal studies, the Pittsburgh Youth Study, and the Pittsburgh Girls Study. Dustin Pardini, Ph.D., is an Associate Professor in the School of Criminology and Criminal Justice at Arizona State University. He originally began working with the Drs. Rolf Loeber and Magda Stouthamer-Loeber as a post-doctoral fellow on the Pittsburgh Youth Study the University of Pittsburgh in 2003, becoming Co-Director of the study in 2011. He has co-managed the last three longitudinal follow-ups of the PYS participants and led efforts to update the official criminal record database to include offenses that occurred from 2000-2011. Alex R. Piquero, Ph.D., is the Ashbel Smith Professor of Criminology and Associate Dean for Graduate Programs in the School of Economic, Political, and Policy Sciences at the University of Texas at Dallas and Adjunct Professor with the Key Centre for Ethics, Law, Justice, and Governance at Griffith University. From 2008 until 2013 he was Co-Editor of the Journal of Quantitative Criminology. David P. Farrington is Emeritus Professor of Psychological Criminology in the Institute of Criminology, Cambridge University. He received the Stockholm Prize in Criminology in 2013. He is Chair of the American Society of Criminology Division of Developmental and Life-Course Criminology. His major research interest is in developmental criminology, and he is Director of the Cambridge Study in Delinquent Development, a prospective longitudinal survey of over 400 London males from age 8 to age 56.