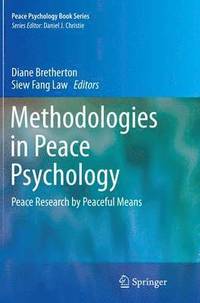 av Diane Bretherton, Siew Fang Law
Häftad Engelska, 2016-10-22
1299
Köp
Spara som favorit
Finns även som
Visa alla 3 format & utgåvor
This volume looks at research methods through the lens of peace studies and peace values. Apart from reviewing established methods from peace psychology, it presents some innovative ideas for conducting research in the area of peace psychology. Many of these methods are drawn from the field, from activities used by active peace practitioners. A critical component of this volume is its core argument that peace research should be conducted by peaceful means, and should model peaceful processes. Organized thematically, the volume begins with a review of the established best practices in peace psychology research methodology, including methods for qualitative research, for quantitative research, and participative action networks. In doing so, it also points to some of the limitations of working for peace within the tradition of a single discipline and to the need to expand psychology methodology, to methodologies. Therefore, the second half of the volume proceeds to explore the realm of innovative, relatively unorthodox research methods, such as participatory and workshop methods, the creative arts, and sports for research purposes. The use of new advances in information technology to conduct peaceful research are also discussed. The concluding chapters synthesize key issues from the previous chapters, and links peace psychology with ideas and implementation of research designs and practices. Finally, it discusses the nature of academic knowledge, and more specifically, academic knowledge in peace psychology, and where that fits into the mission to build a more peaceful world. Overall this book aims to provide peace psychologists with an array of possibilities and best practices for approaching their research. Many researchers find the experience of doing research a somewhat lonely, if not isolating, experience. Methodologies in Peace Psychology: Peace Research by Peaceful Means aims to alleviate this feeling as the use of these more innovative methods leads to a closer engagement with the community and a much more social experience of research. This volume is a useful tool for both new and experienced researchers because it provides leads for idealistic young researchers who want their work to make a difference, in addition to encouraging more reflection and analysis for experienced peace psychologists.
Visa hela texten

Diane Bretherton was the founding director of the International Conflict Resolution Centre in the Pyschology Department at the University of Melbourne and for many years chaired the Committee for the Psychological Study of Peace of the International Union of Psychological Science. She is currently an Honorary Professor in Political Science and International Relations at the University of Queensland. She is also a Visiting Professor at the Zhou En Lai School of International Relations at the University of Nankai in Tianjin, China. She has previously contributed to the Springer Series in Peace Psychology as a co-editor of Peace Psychology in Australia and is a member of the Editorial Advisory Board of the Journal of Peace and Conflict. She has conducted conflict resolution and peace building workshops in many countries in the world, her most recent project being to facilitate a dialogue between indigenous (Mapuche) and non-indigenous people in Chile. She was awarded the Morton Deutsch Award for Research in Conflict Resolution by the American Psychological Association, Washington, in 2011. She has also been made a member of the Order of Australia for theoretical contributions her discipline and for the practical prevention of violence through promoting conflict resolution in the community. Her extensive experience of supervising the research of under-graduate and post-graduate psychology students who wished to make a contribution to the prevention of violence and promotion of peace, within the Psychology Department at the University of Melbourne, informs the proposed book. Siew Fang Law is of Chinese Malaysian descent and received her education in four continents. She is a Senior Lecturer and teaches in conflict resolution and peace at Victoria University, Australia. Her doctoral education was in culture and conflict resolution at RMIT University in Melbourne, Australia. She completed her Masters of Science in Social Psychology at the University of Kent in Canterbury, UK and Bachelor of Arts in Psychology at St Marys University, Canada. Prior receiving her tenure position at Victoria University, she worked a consultant for international organizations such as UNDP and UNESCO in Southeast Asia and had taught at RMIT. She researches in cross-disciplinary issues that fall into the intersections of culture and conflict resolution, identity, post-colonialism, community development and peacebuilding. She is a nationally Accredited Mediator in Australia and a committee member of the Committee for the Psychological Study of Peace