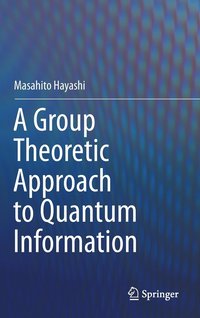 av Masahito Hayashi
Inbunden Engelska, 2016-11-01
609
Köp
Spara som favorit
Skickas inom 10-15 vardagar.
Fri frakt inom Sverige för privatpersoner.
Kan levereras innan jul!
Finns även som
Visa alla 2 format & utgåvor
This book is the first one addressing quantum information from the viewpoint of group symmetry. Quantum systems have a group symmetrical structure. This structure enables to handle systematically quantum information processing. However, there is no other textbook focusing on group symmetry for quantum information although there exist many textbooks for group representation. After the mathematical preparation of quantum information, this book discusses quantum entanglement and its quantification by using group symmetry. Group symmetry drastically simplifies the calculation of several entanglement measures although their calculations are usually very difficult to handle. This book treats optimal information processes including quantum state estimation, quantum state cloning, estimation of group action and quantum channel etc. Usually it is very difficult to derive the optimal quantum information processes without asymptotic setting of these topics. However, group symmetry allows to derive these optimal solutions without assuming the asymptotic setting. Next, this book addresses the quantum error correcting code with the symmetric structure of Weyl-Heisenberg groups. This structure leads to understand the quantum error correcting code systematically. Finally, this book focuses on the quantum universal information protocols by using the group SU(d). This topic can be regarded as a quantum version of the Csiszar-Korner's universal coding theory with the type method. The required mathematical knowledge about group representation is summarized in the companion book, Group Representation for Quantum Theory.
Visa hela texten

"This text is one of the few resources available at this time that merge group theory and quantum information. ...This text could be used, for example, by graduate students with some background in both group theory and quantum information theory wishing to do some independent study or faculty wishing to expand their toolkit." (Sarah Plosker, Mathematical Reviews, September, 2017) "The present book deepens the role of symmetry in quantum computing and quantum information, and paves the way for all researchers, including students and PhD students, to apply group-theoretical methods in these areas. This is a sort of recommendation." (Eugene Kryachko, zbMATH 1362.81003, 2017)

Masahito Hayashi was born in Japan in 1971. He received the B.S. degree from the Faculty of Sciences in Kyoto University, Japan, in 1994 and the M.S. and Ph.D. degrees in Mathematics from Kyoto University, Japan, in 1996 and 1999, respectively. He worked in Kyoto University as a Research Fellow of the Japan Society of the Promotion of Science (JSPS) from 1998 to 2000, and worked in the Laboratory for Mathematical Neuroscience, Brain Science Institute, RIKEN from 2000 to 2003, and worked in ERATO Quantum Computation and Information Project, Japan Science and Technology Agency (JST) as the Research Head from 2000 to 2006. He also worked in the Superrobust Computation Project Information Science and Technology Strategic Core (21st Century COE by MEXT) Graduate School of Information Science and Technology, The University of Tokyo as Adjunct Associate Professor from 2004 to 2007. He worked in the Graduate School of Information Sciences, Tohoku University as Associate Professor from 2007 to 2012. In 2012, he joined the Graduate School of Mathematics, Nagoya University as Professor. He also worked in Centre for Quantum Technologies, National University of Singapore as Visiting Research Associate Professor from 2009 to 2012 and as Visiting Research Professor from 2012 to now. In 2011, he received the Information Theory Society Paper Award (2011) for Information-Spectrum Approach to Second-Order Coding Rate in Channel Coding. In 2016, he received the Japan Academy Medal from the Japan Academy and the JSPS Prize from Japan Society for the Promotion of Science. He is a member of the Editorial Board of the International Journal of Quantum Information and International Journal On Advances in Security. His research interests include classical and quantum information theory, information-theoretic security, and classical and quantum statistical inference.