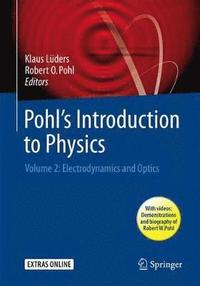 av Klaus Luders, Robert O Pohl
Inbunden Engelska, 2017-12-11
929
Köp
Spara som favorit
This classic introductory textbook on experimental physics covers electrodynamics and optics. It originates from Robert W. Pohl to accompany his famous lecture courses, it served generations of physics and other science majors, not only in his native Germany, and was for many years a standard textbook. Pohl's lucid and memorable style and his consistent use of vivid demonstration experiments made his textbooks unique in their time. This completely revised and updated modern edition retains his style and clarity in an up-todate format. The accompanying videos document the original demonstrations and add many modern touches, bringing to life the numerous illustrations in the book and providing an instructive and motivating complement to the text. They are linked to the corresponding topics in the text and can be accessed directly online from the e-book version. The clear and impressive presentation, always based on experimental demonstrations, gives a lively introduction to the main disciplines in classical physics. Although the volume continues to be comparatively modest, the material it covers exceeds in many places the expectations placed on a basic textbook. Therefore the book addresses undergraduate students as well as their teachers, and also the generally interested readers.
Visa hela texten

Robert Wichard Pohl (1884 - 1976): Pohl was born in Hamburg, and studied physics in Heidelberg and Berlin, where he completed his doctorate in 1906. He obtained the Habilitation there in 1912 (this is an advanced research degree often required in Germany for an academic career). In 1916, he received the offer of a professorship in Gottingen as the successor to E. Riecke, and was full professor and director of the 1st Physics Institute there from 1920 until his retirement in 1952. He published fundamental results in the newly developing 2nd edition on also including thermodynamics; 18th edition 1983, English translation 1932), and "Optik" in 1941 (from the 9th edition on also including atomic physics; 13th edition 1976). Since 1980, the German Physical Society has conferred an annual prize in his name, the "Robert-Wichard-Pohl Prize" for outstanding achievements in teaching and in physics didactics.Klaus Luders was born in 1936 in Cologne, Germany. He studied physics in Gottingen, Munich (LMU), Aachen and Karlsruhe, where he completed his doctorate in 1965. He obtained the Habilitation in 1972 from the Freie Universitat Berlin, and was professor of experimental physics at the FU Berlin from 1972. He spent research stays among others at Kyushu University in Fukuoka, Japan and at the University of Basel, Switzerland. His areas of specialization include solid-state and low-temperature physics, superconductivity and superfluid helium. Robert Otto Pohl was born in 1929 in Gottingen, Germany. He studied physics in Gottingen, Freiburg and Erlangen, and received his doctorate there in 1957. He was professor of physics at Cornell University from 1968, and Goldwin Smith Professor Emeritus from 2000. He was guest professor at the RWTH Aachen, the TH Stuttgart and the University of Canterbury in New Zealand, among others. His area of specialization is solid-state physics, particularly lattice vibrations in crystalline and amorphous materials. William Dean Brewer was born in 1943 in Boise, Idaho, USA. He studied chemistry and mathematics at the University of Oregon and received his PhD in physical chemistry from UC Berkeley in 1970. He obtained the Habilitation at the FU Berlin in 1975 and was professor of experimental physics there from 1977. His research areas are low-temperature and nuclear solid-state physics, and magnetism in thin films and on surfaces. He has translated over a dozen textbooks and monographs from German to English.

I Electricity and Magnetism.- The measurement of electric current and voltage.- The electric field.- Force and energy in electric fields.- The magnetic field.- Induction phenomena.- The relation between electric and magnetic fields.- How the fields depend on the frame of reference.- Forces in magnetic fields.- Applications of induction, in particular to generators and motors.- The inertia of the magnetic field. Alternating current.- Electrical oscillations.- Electromagnetic waves.- Matter in an electric field.- Matter in a magnetic field.- II Optics.- Introduction. Measuring the optical radiant power.- The simplest optical observations.- Image formation and light-beam boundaries.- Fundamental and technical details of image formation and beam limitation.- Radiation energy and beam limitation.- Interference.- Diffraction.- Optical spectrometers.- The velocity of light, and light in moving frames of reference.- Polarized light.- The relation between absorption, reflection and refraction of light.- Scattering.- Dispersion and absorption.- Thermal radiation.- Visual perception and photometry.-Solutions to the Exercises.