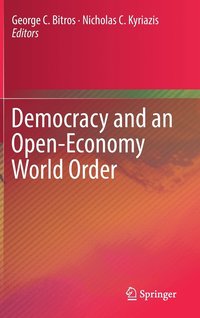 Democracy and an Open-Economy World Order

av George C Bitros, Nicholas C Kyriazis
Inbunden Engelska, 2017-04-24
1259
Köp
Spara som favorit
Skickas inom 7-10 vardagar.
Fri frakt inom Sverige för privatpersoner.
Finns även som
Visa alla 1 format & utgåvor
The essays in this volume explore several key issues facing democracies today. They discuss the dilemma of how to protect civil liberties and individual freedoms in the light of external threats and assess the policies adopted by governments in this area. The book also addresses the question of how free, exactly, free markets should be in an economy in order to secure social peace, before going on to highlight the rudiments of the model of social market economy, as applied in Germany. It examines the problem of the democratic and legitimacy deficits that beset European integration and suggests reforms for a more democratic European Union. Last but not least, by looking back in history, they provide evidence and propose policies for the revitalization of institutions in present-day democracies. The book is of considerable interest to researchers and students in economics and political science, as well as to readers who wish to gain insights into the thorny social issues involved.
Visa hela texten

George C. Bitros, obtained a Ph.D in economics from New York University and held positions at New York University, the Research Department of the Bank of Greece and Athens University of Economics and Business until his retirement in 2007. He has published a large number of scientific papers in major scholarly journals; co-authored and/or co-edited several books published by some of the most well-known international publishers; co-edited the Greek Economic Review and the Journal of Economic Asymmetries; served as research associate in the National Bureau of Economic Research (USA). In the public domain he has written over 300 essays, predominantly in Greek, given numerous public speeches and interviews to newspapers and periodicals, and debated social and economic issues in public fora, as well as TV and Radio stations. He served in advisory posts in government, like the Council of Economic Advisors, the National Authority of Telecommunications and Posts, and the Ministry of Commerce and Industry, participated in numerous government commissions for the restructuring of the Public Administration of Greece and various other sectors of the Greek economy, and, held several directorships by participating in the Boards of Directors of major business concerns like the Nationl Telecommunications Organization, Bitros Holdings S.A., Nestle Hellas, S.A., etc. Nicholas C. Kyriazis combines academic and business experience. He holds a Ph.D. in economics from Bonn University, Germany and was a visiting Professor at Harvard and Trier Universities. He is currently Professor at the Economics Department, University of Thessaly, Greece. Previous positions include: Directorate General for General for Research of the European Parliament, advisor to the government of the National Bank of Greece, advisor to the Minister of Finance and Minister of Defence since 1998 who contribute as one of the major consultants for the Greek Command, Control, Communications, Computers and Military intelligence (C4I). He was also secretary of the National School for Public Administration. He is currently member of the board of Alpha-Trust-Andromeda Investment Fund (listed in the Athens Stock Exchange), Vice President of Ergoman Telecommunications (a service providing company), Vice President of the Black Orange (a movie producing company) and the President of the Kostas Kyriazis foundation. He has published more than 40 papers in international referred academic journals, 7 academic books, and he has contributed with papers in 16 academic handbooks, both Greek and English. He is also one of Greece's well known novelists with 17 novels published in Greek language and 4 in English. In 2005 the President of the French Republic honoured him with the France's highest decoration, the Knight of the Legion of Honour (Chevalier de la Legion d' Honneur) for his contribution to the European integration and the preparation for the EMU as a member of the Delors-Moreau committee.

Preface.- Part I: Ethics and Liberty in the New World Economic Order.- Part II: Democracy and Free Market Economy.- Part III: The Political Economy Institutions.- Part IV: On the Routs of Economic Crisis in the European Periphery.- Part V: Democracy in the European Union.- Part VI: Other Aspects of Democracy, Peace and Conflict.