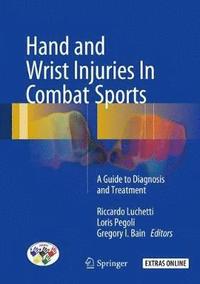 A Guide to Diagnosis and Treatment

av Riccardo Luchetti, Loris Pegoli, Gregory I Bain
Inbunden Engelska, 2017-12-11
1179
Köp
Spara som favorit
Skickas inom 5-8 vardagar.
Fri frakt inom Sverige för privatpersoner.
Finns även som
Visa alla 1 format & utgåvor
This well-illustrated book describes the injuries to the hand and wrist that are commonly encountered among participants in combat sports, explaining the mechanisms of injury and offering state of the art guidance on diagnosis and treatment. It covers both injuries characteristic of individual sports, such as kendo, karate, judo, jiu-jitsu, aikido, and mixed martial arts, and pathologies encountered across the full range of combat sports, including boxing, wrestling, and taekwondo. In addition to management, careful attention is paid to rehabilitation following injury and to psychological aspects of recovery from injury. The book is the result of a collaboration with the International Society for Sport Traumatology of the Hand (ISSPORTH) and has been designed to meet the needs of all practitioners who work with combat sports athletes. While especially helpful for surgeons, physicians, therapists, and rehabilitators, it will also be of value to coaches, trainers, and players. The authors are leading international experts in the field who have been involved with international societies and in some cases have personal experience of combat sports at a high level.
Visa hela texten