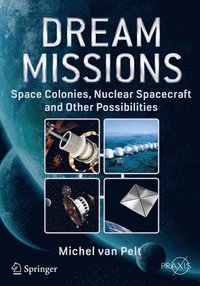 av Michel Van Pelt
Häftad Engelska, 2017-06-07
349
Köp
Spara som favorit
Skickas inom 5-8 vardagar.
Fri frakt inom Sverige för privatpersoner.
Finns även som
Visa alla 1 format & utgåvor
This book takes the reader on a journey through the history of extremely ambitious, large and complex space missions that never happened. What were the dreams and expectations of the visionaries behind these plans, and why were they not successful in bringing their projects to reality thus far? As spaceflight development progressed, new technologies and ideas led to pushing the boundaries of engineering and technology though still grounded in real scientific possibilities. Examples are space colonies, nuclear-propelled interplanetary spacecraft, space telescopes consisting of multiple satellites and canon launch systems. Each project described in this book says something about the dreams and expectations of their time, and their demise was often linked to an important change in the cultural, political and social state of the world. For each mission or spacecraft concept, the following will be covered: * Description of the design. * Overview of the history of the concept and the people involved. * Why it was never developed and flown * What if the mission was actually carried out - consequences, further developments, etc.
Visa hela texten

For the last twelve years, Michel van Pelt has worked as a cost engineer, systems engineer and as Concurrent Design Facility team leader for the technical center of the European Space Agency (ESA) in The Netherlands. He has been involved in many ESA space projects during many different phases, which has given him a unique insight in the definition, conceptual design, development, launch and operation of spacecraft. Specifically, his work in ESA's Concurrent Design Facility for conceptual design studies has given him a deep understanding of the various scientific, technical, financial and political issues and constraints that drive the development of spacecraft, as well as a broad knowledge of innovative ideas for future launchers and space missions. He has written many articles on space and is editor and writer for two Dutch spaceflight magazines. In addition, he regularly gives presentations on space-related topics for student associations, etc. His Copernicus - Praxis book "Space Tourism, Adventures in Earth Orbit and Beyond" was published in 2005, followed by "Space Invaders, How Robotic Spacecraft Explore the Solar System" in 2006, "Space Tethers and Space Elevators" in 2009, and "Rocketing into the Future" in 2012, all published through Springer/Praxis.