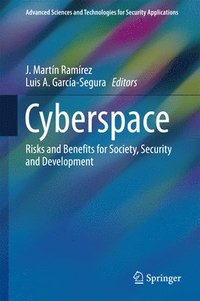 Risks and Benefits for Society, Security and Development

av J Martin Ramirez, Luis A Garcia-Segura
Inbunden Engelska, 2017-05-22
1079
Köp
Spara som favorit
Skickas inom 7-10 vardagar.
Fri frakt inom Sverige för privatpersoner.
Finns även som
Visa alla 2 format & utgåvor
This book covers many aspects of cyberspace, emphasizing not only its possible 'negative' challenge as a threat to security, but also its positive influence as an efficient tool for defense as well as a welcome new factor for economic and industrial production. Cyberspace is analyzed from quite different and interdisciplinary perspectives, such as: conceptual and legal, military and socio-civil, psychological, commercial, cyber delinquency, cyber intelligence applied to public and private institutions, as well as the nuclear governance.
Visa hela texten

"This book, an edited volume by J. Martin Ramirez and Luis A. Garcia-Segura, tries to outline the various risks and benefits of cyberspace. ... this book has very good information on various aspects of cyberspace and will be useful for graduate students, researchers, lawmakers, and practitioners who work in cybersecurity." (Computing Reviews, November, 2017)

J. Martin Ramirez is Chair of the Center for Conflict Studies at Universidad Nebrija. He is also Fellow of the World Academy of Art and Science and Chair of CICA International and of the Spanish Pugwash Movement (Peace Nobel Price 1995). He studied Medicine, Humanities, and Law, obtaining a PhD degree in Medicine and Surgery (Neurosciences) and in Philosophy (Education) as well as three Diplomas and a Master in National Defense at the Spanish CESEDEN. Research Fellow of International Security Program of the Harvard University and Visiting Fellow of the Hoover Institution on War, Revolution and Peace, Stanford University, probably the most important left-leaned and right-leaned American think-tanks, respectively. Several times official of the Boarding Counsel of the International Society for Research on Aggression (ISRA), he is on the Advisory Board of the Society for Terrorism Research and of the Professors World Peace Academy, and Fellow of the World Academy of Art and Sciences, and has a Professional Award on Aggression and Inter-ethnic Conflicts by the East-West Center, established by the United States Congress, among others. Dr. Martin Ramirez is author of more than 450 scientific publications, among books and articles, in more than ten languages. He has also been Head of the Complutense Research Group on Sociopsychobiology of Aggression, Head of the Departments of Psychobiology at Seville and Complutense Universities, and Director of the Cabinet of the Rector at the Madrid Autonomous University. Luis A. Garcia Segura studied Law, with a Masters Degree in Business Law and a PhD in Social Sciences from the University of Nebrija. He is the coordinator of the Centre on Conflict Studies (Chair Nebrija-Santander). He has worked for the public and private sectors in Education, Law and ICT projects. He is currently a bar member of the Ilustre Colegio de Abogados de Madrid (ICAM) and an Associate member of the American Bar Association (ABA).