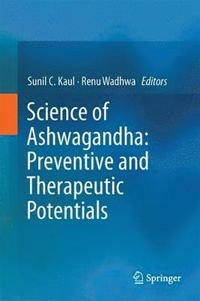 av Sunil C Kaul, Renu Wadhwa
Inbunden Engelska, 2017-10-02
2329
Köp
Spara som favorit
Finns även som
Visa alla 2 format & utgåvor
Rapidly increasing aging population and environmental stressors are the two main global concerns of increasing incidence of a variety of pathologies in the modern society. The complex etiologies and pathologies cause major challenges to disease treatment. On the other hand, several herbs are known for their health-caring and disease-curing activities. Ashwagandha, a popular herb in Indian traditional home medicine, Ayurveda, has gathered increasing recognition in recent years when the chemically synthesized drugs for single target therapies showed limited success and adverse toxic effects. Ashwagandha is known as a powerful adaptogen and trusted to enhance function of the brain, reproductive system, cell-mediated immunity and increase the body's defense against disease, and possess anti-inflammatory, anticancer and anti-arthritic activities. In this book, for the first time, we provide a complete portrait on scientific understanding of the effects of Ashwagandha and its active principles for a variety of preventive and therapeutic activities.
Visa hela texten

Dr. Sunil Kaul was born and brought up in Kalimpong (Darjeeling). He obtained his MPhil and PhD degrees from the University of Delhi, India. After his initial post-doctoral training, he was appointed as a researcher at the National Institute of Advanced Industrial Science & Technology (AIST) in Japan, and has been working there for last 28 years. He is now a Chief Senior Research Scientist. His major research interest is to understand the molecular mechanism of stress, aging and cancer. He has been merging the traditional knowledge with modern technologies like gene silencing and imaging to understand the mechanism of action of Ayurvedic herb, Ashwagandha and others. He is a coordinator of the DBT (India)-AIST (Japan) International Laboratory for Advanced Biomedicine at AIST, Japan. With more than 200 research publications in International peer revised journals and several invited talks Internationally, he has been in Editorial board of several scientific journals. He is a Fellow of Geriatrics Society of India (FGSI), Overseas Fellow of Biotech Research Society of India (FBRSI), Fellow of Indian Academy of Neuroscience (FIAN), and Foreign Fellow of National Academy of Sciences, India (FNASc).