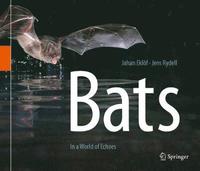 In a World of Echoes

av Johan Ekloef, Jens Rydell
Inbunden Engelska, 2018-05-04
389
Köp
Spara som favorit
Skickas inom 7-10 vardagar.
Gratis frakt inom Sverige över 159 kr för privatpersoner.
This comprehensive book about the lives of bats is about a group of peculiar, mythical and fascinating animals. They are mammals, just like us, but still so different. The book covers bats from Latin American Maya temples to Swedish potato cellars; from the plains of Kenya to the Taiwanese mountains. We perceive their shadows flitting by in the summer nights, hear their mating calls in the darkness of autumn and see their silhouettes in the dim street light. The bats live in our houses and forage in our gardens and parks. But who are they and how do they lead their lives? The text and exquisite photos give an unsurpassed insight into the world of sounds and smells that bats encounter each night. We are told about how their senses, way beyond our human perception abilities, shape their lives. We get to know more about their habits, their long evolution and their cohabitation with humans, and how important they are to the environment. You will never again feel lonely in the darkness of the night.
Visa hela texten

"Bats: In a World of Echoes offers readers an interesting glimpse into the secret lives of bats. ... The book is nicely illustrated with a wide assortment of full-color photographs of bats in the wild. Scientific jargon is kept to a minimum and discussion is largely accessible, making this a suitable text for general readers interested in learning more about the unique lives of bats." (D. A. Brass, Choice, Vol. 56 (5), 2019)

Johan Ekloef (PhD) is a Swedish zoologist and copywriter. He works as a consultant with bat surveys, conservation biology, research, and scientific communication. Johan has published fictional as well as non-fictional books on bats, animal evolution and life in general. He travels throughout Sweden, not just in search of bats, but also to learn more about folklore and bat myths. In 2016, he received a scholarship from the Swedish Writers' Union to explore the field of bat mythology. Jens Rydell (PhD) is a Swedish scientist and photographer, working with bat ecology and conservation at Lund University. Jens is the author of well over a hundred of scientific papers on bats and insects, lately with focus on the effects of wind power and artificial lighting. Jens was rewarded with the Royal Swedish Academy of Sciences conservation prize 2017 and was the same year nominated for the finals in the Wildlife Photographer of the Year competition held by Natural History Museum in London. /p>

Evolution and diversity.- Flight and morphology.- Senses.- Hunting and Feeding.- Arms Race.- Reproduction.- Hibernation and migration.- Roosts.- Living Together.- Under cover of darkness.- Of bats and men.