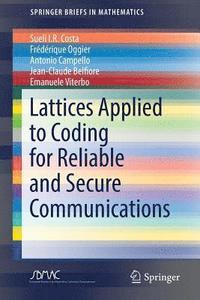 Lattices Applied to Coding for Reliable and Secure Communications

av Sueli I R Costa, Frederique Oggier, Antonio Campello, Jean-Claude Belfiore, Emanuele Viterbo
Häftad Engelska, 2018-04-10
539
Köp
Spara som favorit
Skickas inom 10-15 vardagar.
Fri frakt inom Sverige för privatpersoner.
Kan levereras innan jul!
Finns även som
Visa alla 1 format & utgåvor
This book provides a first course on lattices - mathematical objects pertaining to the realm of discrete geometry, which are of interest to mathematicians for their structure and, at the same time, are used by electrical and computer engineers working on coding theory and cryptography. The book presents both fundamental concepts and a wealth of applications, including coding and transmission over Gaussian channels, techniques for obtaining lattices from finite prime fields and quadratic fields, constructions of spherical codes, and hard lattice problems used in cryptography. The topics selected are covered in a level of detail not usually found in reference books. As the range of applications of lattices continues to grow, this work will appeal to mathematicians, electrical and computer engineers, and graduate or advanced undergraduate in these fields.
Visa hela texten

Sueli I. R. Costa received her PhD in Mathematics from the University of Campinas, Brazil, and pursued her post-doctoral studies at the Institute for Advanced Study - IAS, Princeton, USA. She is a professor at the Institute of Mathematics of University of Campinas and her recent research activities in lattice coding and information include short-term visits to the Bernoulli Centre, EPFL, Switzerland; the AT&T Research Lab, USA, Telecom ParisTech, France, and serving as chair of the IEEE-Information Theory Society Brazil Chapter. Frederique Oggier received a PhD in mathematics from the Swiss Federal Institute of Technology (EPFL, before continuing post-doctoral studies at the California Institute of Technology - Caltech, USA,and the Research Center for Information Security at the National Institute of Advanced Industrial and Science Technology, Japan. She is currently an associate professor at Nanyang Technological University, Singapore. Antonio Campello received the PhD degree in Applied Mathematics from the University of Campinas, Brazil, in 2014. He was a visiting academic at the Complutense University of Madrid in 2009, at the Ecole Polytechnique Federale de Lausanne (EPFL) in 2011, and at AT&T Research Labs - Shannon Labs, New Jersey in 2013. After spending one year at Telecom Paristech, France, he is currently conducting postdoctoral research at Imperial College London, UK. His research interests are in coding theory, discrete geometry, and communications. Jean-Claude Belfiore received his Engineering degree from the EcoleSuperieure d'Electricite - Supelec in 1985, his PhD from Telecom ParisTech in 1989 and his Habilitation from Universite Pierre et Marie Curie in 2001. In 1989 he joined the Telecom ParisTech, where he is currently serving as a full professor. He has made pioneering contributions on modulation and coding for wireless systems using tools from number theory. He is also, together with Ghaya Rekaya and Emanuele Viterbo, one of the co-inventors of the celebrated Golden Code. In 2007, he was the recipient of the Blondel Medal. Emanuele Viterbo received his degree in Electrical Engineering in 1989 and his PhD in 1995, also in Electrical Engineering, from the Politecnico di Torino, Italy. He is currently a professor at the Monash University, Australia. His main research interests are in lattice codes for the Gaussian and fading channels, algebraic coding theory, algebraic space-time coding, digital terrestrial television broadcasting, digital magnetic recording, and coding for non-volatile memories.