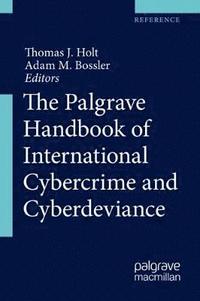 The Palgrave Handbook of International Cybercrime and Cyberdeviance

Thomas J. Holt is a professor in the School of Criminal Justice at Michigan State University, and his research focuses on cybercrime, cyberterrorism, and police responses to these phenomena. His work has been published in various peer reviewed journals including British Journal of Criminology, Crime and Delinquency, Deviant Behavior, and Terrorism and Political Violence. He has co-authored multiple books including Cybercrime and Digital Evidence: An Introduction, and Cybercrime in Progress: Theory and Prevention of Technology-Enabled Offenses. Dr. Holt is also a fellow at the Netherlands Institute for the Study of Crime and Law Enforcement, a founding member of the European Society of Criminology's working group on cybercrime, and the director of the International Interdisciplinary Research Consortium on Cybercrime, a global association of scholars in the social and technical sciences whose research considers cybercrime and cybersecurity. Dr. Adam M. Bossler is Professor and Chair of the Department of Criminal Justice and Criminology at Georgia Southern University. He earned his doctorate in criminology and criminal justice from the University of Missouri - St. Louis. His research primarily focuses on examining the application of traditional criminological theories to various forms of cybercrime offending and victimization and the law enforcement response to cybercrime. His research has been funded by the National Science Foundation, Bureau of Justice Assistance, and the United Kingdom Home Office. He is a co-author of three books: Cybercrime and Digital Forensics: An Introduction, 2nd edition (Routledge); Cybercrime in Progress: Theory and Prevention of Technology-Enabled Offenses (Routledge) (winner of the 2017 Academy of Criminal Justice Sciences' International Section Outstanding Book Award); and Policing Cybercrime and Cyberterror (Carolina Academic Press). Some of his recent peer-reviewed work can be found in Criminology and Public Policy, International Journal of Offender Therapy and Comparative Criminology, Policing, Journal of Crime & Justice, and Deviant Behavior. He teaches courses on hackers, malware, and economic crimes; cybercrimes against persons and society; cybercriminology; criminology; and policing. He is an active member of the American Society of Criminology's Division of Cybercrime, the International Interdisciplinary Research Consortium on Cybercrime (IIRCC), and the European Society of Criminology's Working Group on Cybercrime.