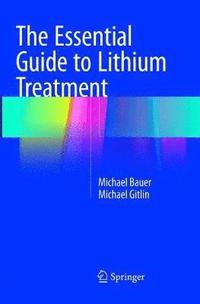 The Essential Guide to Lithium Treatment

av Michael Bauer, Michael Gitlin
Häftad Engelska, 2018-05-30
899
Köp
Spara som favorit
Finns även som
Visa alla 2 format & utgåvor
This book is a practical, up-to-date guide to the correct use of lithium for the short- and long-term treatment of mood disorders. Among the subjects addressed are the pharmacology and mechanisms of action of lithium, its use for maintenance treatment, the role of lithium in the treatment of mania and depression and in suicide prevention, further clinical indications, the administration of lithium during pregnancy and the postpartum period, and adverse effects and their management. Relevant background information is provided on the diagnosis, classification, and natural course of mood disorders, and an overview of other treatments for bipolar disorder and major depression is included. Lithium is the essential medication for patients with mood disorders. The evidence of its efficacy in maintenance treatment is acknowledged in all major international treatment guidelines for bipolar disorders and, when used correctly, lithium unquestionably produces the most dramatic benefits of any medication in psychopharmacology. This essential guide is written by two international experts in the treatment of mood disorders who have more than 25 years of experience in the use of lithium and have authored numerous scientific articles on lithium.
Visa hela texten

Michael Bauer, MD, PhD, is Professor of Psychiatry and Executive Chair of the Department of Psychiatry and Psychotherapy at the Medical Faculty, Technische Universitat Dresden, in Germany, where he is also Physician-in-Chief at the Psychiatric Hospital and Outpatient Clinics of the University Hospital Carl Gustav Carus. He received his medical degree from Freie Universitat Berlin School of Medicine and a PhD in molecular biology and biochemistry from Freie Universitat Berlin. He is the editor together with Prof. Paul Grof and Prof Bruno-Mueller-Oerlinghausen of the definitive scientific textbook "Lithium in Neuropsychiatry-The Comprehensive Guide" (from 2006), and has authored and coauthored more than 400 articles published in peer-reviewed journals, including The Lancet, Molecular Psychiatry and The American Journal of Psychiatry, and books in the field of mood disorders. He is President of the International Group for the Study of Lithium-Treated Patients (IGSLi), chairs the World Federation of Societies of Biological Psychiatry's (WFSBP) Task Force on Treatment Guidelines for Unipolar Depressive Disorders, and is project coordinator of the National consortium for the German Treatment Guidelines for Bipolar Disorder, and leads the National Research Network on Bipolar Disoder "BipoLife". He is Editor-in-Chief of the International Journal of Bipolar Disorders and Pharmacopsychiatry and editor of Der Nervenarzt. Michael J. Gitlin, M.D. is Professor of Clinical Psychiatry at the University of California at Los Angeles (UCLA) School of Medicine. He is currently the Director of the Adult Division in the Department of Psychiatry, Medical Director of the Neuropsychiatric Behavioral Health Services and Director of the Mood Disorders Clinic. From 1980 until 2004, he was the Medical Director of the Aftercare Clinic, a research clinic in schizophrenia. He is the author of many scientific articles and book chapters as well as four books, including: two editions of a solo authored psychopharmacology textbook written for nonphysician therapists entitled "The Psychotherapist's Guide to Psychopharmacology" published by the Free Press, the coauthor of "Psychotropic Drugs and Women" with Dr. Victoria Hendrick and the coauthor of "Clinician's Guide to Bipolar Disorder: Integrating Pharmacology with Psychotherapy", with Dr. David Miklowitz. He served as Chief of Staff at the Neuropsychiatric Hospital from 1997-1999. Among his awards are: Distinguished Educator Award in Teaching from the UCLA Department of Psychiatry (1999), Outstanding Housestaff Teaching Award, 1994 and 2008, Teacher of the Year from the Psychiatric Times in 2002; Dadone Clinical Teaching award from the Geffen School of Medicine at UCLA in 2010; and the Leonard Tow Humanism in Medicine award from the Geffen School of Medicine at UCLA in 2010.