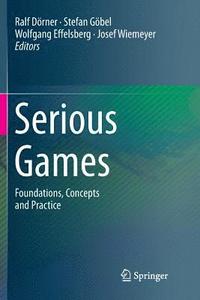 av Ralf Dorner, Stefan Gobel, Wolfgang Effelsberg, Josef Wiemeyer
Häftad Engelska, 2018-06-14
839
Köp
Spara som favorit
Skickas inom 10-15 vardagar.
Fri frakt inom Sverige för privatpersoner.
Finns även som
Visa alla 2 format & utgåvor
This textbook provides an introduction to the fundamentals of serious games, which differ considerably from computer games that are meant for pure entertainment. Undergraduate and graduate students from various disciplines who want to learn about serious games are one target group of this book. Prospective developers of serious games are another, as they can use the book for self-study in order to learn about the distinctive features of serious game design and development. And ultimately, the book also addresses prospective users of serious game technologies by providing them with a solid basis for judging the advantages and limitations of serious games in different application areas such as game-based learning, training and simulation or games for health. To cater to this heterogeneous readership and wide range of interests, every effort was made to make the book flexible to use. All readers are expected to study Chapter 1, as it provides the necessary basics and terminology that will be used in all subsequent chapters. The eleven chapters that follow cover the creation of serious games (design, authoring processes and tools, content production), the runtime context of serious games (game engines, adaptation mechanisms, game balancing, game mastering, multi-player serious games), the effects of serious games and their evaluation (player experience, assessment techniques, performance indicators), and serious games in practice (economic aspects, cost-benefit analysis, serious game distribution). To familiarize the readers with best practice in this field, the final chapter presents more than 30 selected examples of serious games illustrating their characteristics and showcasing their practical use. Lecturers can select chapters in a sequence that is most suitable for their specific course or seminar. The book includes specific suggestions for courses such as "Introduction to Serious Games", "Entertainment Technology", "Serious Game Design", "Game-based Learning", and "Applications of Serious Games".
Visa hela texten

Ralf Doerner is Professor for Computer Graphics and Virtual Reality at the RheinMain University of Applied Sciences at Wiesbaden. He is author or co-author of more than 80 peer reviewed publications as well as text books. Starting to work in the area of serious games in 1998, he has held numerous courses on this topic and also conducted several public and contract research projects in this area. His research interests lie in the areas of visualization and the usage of computer graphics for e-learning and entertainment where his focus is not only on the user but also on the author of these applications. Wolfgang Effelsberg is Professor for Computer Networks and Multimedia Technology at the University of Mannheim. In 1984, after three years as a post-doc in the United States, he became a research staff member at IBM's European Networking Center in Heidelberg. He joined the University of Mannheim in 1989. He is the author of 11 books and more than 230 other reviewed publications. Stefan Goebel is Academic Councilor and head of the Serious Games group at the Multimedia Communications Lab at TU Darmstadt. He has a long-term experience in Graphic Information Systems, Interactive Digital Storytelling, Edutainment applications and Serious Games. Stefan is the author or co-author of 150+ peer reviewed publications, the initiator and host of the GameDays and Joint Conference on Serious Games, and project leader of different collaborative research projects on a regional, national and international level. Josef Wiemeyer is Professor for Sport Science with special emphasis on Movement, Training and Computer Science at TU Darmstadt. Based on extensive work on e-learning and ICT-supported training (from 1997), he started research in Serious Games in 2010. He developed and evaluated several Serious Games for education, health, science and sport. He has published numerous reviews and single studies addressing Serious Games. He is reviewer and co-editor of several international journals.