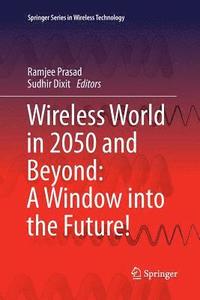 Wireless World in 2050 and Beyond: A Window into the Future!

Sudhir Dixit is the co-founder and CEO of Skydoot, Inc; in addition, he is driving the development of the Basic Internet service and is a member of the Basic Internet Foundation. He is a former Distinguished Chief Technologist at Communications and Media Services (Americas), and Hewlett-Packard Enterprise Services in Palo Alto, CA; and Director of HP Labs India. Prior to joining HP Labs, Dixit held a joint appointment as Chief Technology Officer at the Center for Internet Excellence and Research Manager at the Center for Wireless Communications in Oulu, Finland. He has also held various positions with leading companies, for example, BlackBerry as Senior Director, Nokia and Nokia Networks as Senior Research Manager, Head of Nokia Research Center and Head of Network Technology (USA). He is also currently a Vice Chair for WWRF in the Americas region and Chair of the Vision Committee of the WWRF. Dixit has 21 patents granted by the US PTO and has published over 200 papers and edited, co-edited, or authored six books. He is presently on the editorial boards of IEEE Spectrum Magazine, Cambridge University Press Wireless Series and Springer's Wireless Personal Communications Journal and Central European Journal of Computer Science (CEJS). Ramjee Prasad has been holding the Professorial Chair of Wireless Information and Multimedia Communications at Aalborg University since 1999. He is the Founding Director of the Center for TeleInfrastruktur (CTIF), and is a Fellow of IEEE (USA), the IET (UK) and IETE (India). He is the founding chairman of the Global ICT Standardization Forum for India (GISFI) and was the founding chairman of the European Center of Excellence in Telecommunications known as HERMES, of which he is now the honorary chairman. He was the founding head and program director of the Center for Wireless and Personal Communications (CWPC) of the International Research Center for Telecommunications-Transmission and Radar (IRCTR) at DUT, The Netherlands. He is also the recipient of many international academic, industrial, and governmental awards, of which the most recent is the Knight of the Order of Dannebrog awarded by the Queen of Denmark for internationalization of top-class telecommunication research and education. Prof. Prasad has authored and co-authored more than 500 articles, 8 monographs, 38 books, and 18 book chapters. Furthermore he has 15 patents within his research areas.

Introduction.- Technology advancements in 2050 and a prediction of the world beyond 2050.- Beyond the next generation access.- Ubiquitous wireless communications beyond 2050.- Networking without networking.- Overcoming the complexity of beyond 2050 Internet of Things networks.- Device-free RF-based sensing beyond activity recognition and localization.- Perspectives on enabling technologies for intelligent wireless sensor networks.- Energy efficient joint antenna techniques for future mobile communication.- Role of Ultra Near-field (i.e., Human Bond Communication) in 2050 and beyond.- Advances in cyber security meet communications requirements in 2050 and beyond.- Access security and personal privacy in public cellular communication systems: The past, present and beyond 2020.- Re-think tomorrow's car: The convergence of automotive and IoT.- The future of healthcare driven by Sensor and analytics.- Big data and Internet of Things - challenges and opportunities for accelerated business development beyond 2050.- Defining the ICT strategies for beyond 2050.- A futuristic multi business model innovation approach to integrate and exploit the synergies across business units.- Challenges and opportunities for wireless in wildlife conservation in human dominated landscapes.- Summary and conclusions.- Index.