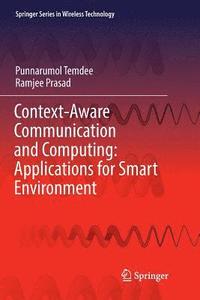 av Punnarumol Temdee, Ramjee Prasad
Häftad Engelska, 2018-08-04
1679
Köp
Spara som favorit
Skickas inom 10-15 vardagar.
Fri frakt inom Sverige för privatpersoner.
Finns även som
Visa alla 1 format & utgåvor
This book introduces context-aware computing, providing definitions, categories, characteristics, and context awareness itself and discussing its applications with a particular focus on smart learning environments. It also examines the elements of a context-aware system, including acquisition, modelling, reasoning, and distribution of context. It also reviews applications of context-aware computing - both past and present - to offer readers the knowledge needed to critically analyse how context awareness can be put to use. It is particularly to those new to the subject area who are interested in learning how to develop context-aware computing-oriented applications, as well as postgraduates and researchers in computer engineering, communications engineering related areas of information technology (IT). Further it provides practical know-how for professionals working in IT support and technology, consultants and business decision-makers and those working in the medical, human, and social sciences.
Visa hela texten

Ramjee Prasad is a worldwide established scientist, who has given fundamental contributions towards the development of wireless communications. He achieved fundamental results towards the development of CDMA and OFDM, taking the leading role by being the first in the world to publish books in the subjects of wireless CDMA (1996) and OFDM (1999). Ramjee Prasad as a CTIF leader has launched several major breakthrough concepts, with the most significant one, the Wireless Innovative System for Dynamic Operating Megacommunications (WISDOM) that laid the focus on the wireless technology beyond 2020. WISDOM is a pioneering vision for the future of wireless communications and 5G that proposed to design and develop novel technologies, systems and networks that shall globally integrate, interconnect, and communicate into a flexible and dynamically operating architecture. He started as a Senior Research Fellow (1970-1972) and continued as an Assistant Professor (1972-1980) at the Birla Institute of Technology (BIT), Mesra, Ranchi, India. He was appointed as an Associate Professor in 1980-1983 and head of the Microwave Laboratory there. From 1983-1988 Ramjee Prasad worked at the University of Dar es Salaam (UDSM), Tanzania, where he became Full Professor of Telecommunications in the Department of Electrical Engineering in 1986.From February 1988 till May 1999 Ramjee Prasad worked at the Delft University of Technology (DUT), The Netherlands at the Telecommunications and Traffic Control Systems Group. He was the founding head and program director of the Centre for Wireless and Personal Communications (CWPC) of the International Research Centre for Telecommunications-Transmission and Radar (IRCTR) at DUT, The Netherlands. Prior to founding CTIF, Ramjee Prasad was the Co-Director of the Center for Person Kommunikation until December 2002. He became the research director of the department of Communication and Technology in 2003.He is a Honary Professor in South Africa of University of Cape Town and University of KwaZulu-Natal.He has published more than 30 books, 1000 plus journals and conferences publications, more than 15 patents, over 100 PhD Graduates and larger number of Masters (over 250). Punnarumol Temdee received B.Eng. in Electronic and Telecommunication Engineering, M. Eng in Electrical Engineering, and Ph.D. in Electrical and Computer Engineering from King Mongkut's University of Technology Thonburi. She is currently an assistant professor at the School of Information Technology, Mae Fah Luang University, Chiang Rai, Thailand. Her research interests are artificial intelligence, context aware computing, ubiquitous learning, and social network analysis. She has strong experience in Information Communication Technology oriented projects particular for rural area.