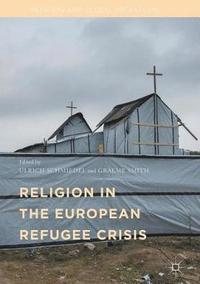 Religion in the European Refugee Crisis

av Ulrich Schmiedel, Graeme Smith
Häftad Engelska, 2019-05-10
1499
Köp
Spara som favorit
Skickas inom 10-15 vardagar.
Fri frakt inom Sverige för privatpersoner.
Finns även som
Visa alla 2 format & utgåvor
This book explores the roles of religion in the current refugee crisis of Europe. Combining sociological, philosophical, and theological accounts of this crisis, renowned scholars from across Europe examine how religion has been employed to call either for eliminating or for enforcing the walls around "Fortress Europe." Religion, they argue, is radically ambiguous, simultaneously causing social conflict and social cohesion in times of turmoil. Charting the constellations, the conflicts, and the consequences of the current refugee crisis, this book thus answers the need for succinct but sustained accounts of the intersections of religion and migration.
Visa hela texten

"The editors' aim for this timely compilation of essays is to show how Europeans have rediscovered religion in order to call for the fortification or defortification of Europe. ... This rich collection of essays will be valued by all who wish to reflect on the role of religion in Europe's current refugee crisis." (Fleur Houston, Reform, March, 2019)

Ulrich Schmiedel is Lecturer in Theology, Politics and Ethics at the School of Divinity, University of Edinburgh, where he also serves as Deputy Director of the Centre for Theology and Public Issues. He specializes in political and public theology. Graeme Smith is Professor of Public Theology and Head of the Department of Theology, Philosophy and Religious Studies at the University of Chichester, UK. He writes on social, public and political theology, including two books, Oxford 1937: The Universal Christian Council for Life and Work and A Short History of Secularism.

1 Introduction: Charting a Crisis Part I Constellations 2 Perceptions of Plurality: The Impact of the Refugee Crisis on the Interpretation of Religious Pluralization in Europe 3 Infiltrators, Imposters or Human Beings? The Slovenian Socio-Political Imaginary, Christianity, and the Responses to the 2015-2016 Migrant Crisis 4 Between Traditionalism, Fundamentalism, and Populism: A Critical Discourse Ana lysis of the Media Coverage of the Migration Crisis in Poland 5 Confronting the Current Refugee Crisis: The Importance of Islamic Citizens' Initiatives in Germany 6 Fearing the Faith of Others? Government, Religion, and Integration in Norway Part II Conflicts 7 Christianity in a Post-Christian Context: Immigration, Church Identity, and the Role of Religion in Public Debates 8 "Refugees" and the Problem of Identity in the UK 9 Against the Manichees: Immigration Detention and the Shaping of the Theo-Political Imagination 10 None is Still Too Many: Holocaust Commemoration and Historical Anesthetization 11 &n bsp;&nb sp;&nbs p; "We Can Do This!": Tackling the Political Theology of Populism Part III Consequences 12 Who are the People? Towards a Theological Ethics of Citizenship and Community 13 Turning a Curse into a Blessing? Theological Contributions to a Resource-Orientated Narrative on Migration in Europe p> 14 Christ, the Stranger: The Theological Relevance of Migration ">15 ;; What Does It Mean to Be a Progressive Intellectual after the Refugee Crisis in Europe? A Dialogue with Tariq Ramadan 16 Conclusion: The Theological Takeover