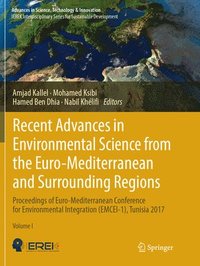 av Amjad Kallel, Mohamed Ksibi, Hamed Ben Dhia, Nabil Khelifi
Häftad Engelska, 2018-09-07
4989
Köp
Spara som favorit
Finns även som
Visa alla 2 format & utgåvor
This volume includes the papers presented during the 1st Euro-Mediterranean Conference for Environmental Integration (EMCEI) which was held in Sousse, Tunisia in November 2017. This conference was jointly organized by the editorial office of the Euro-Mediterranean Journal for Environmental Integration in Sfax, Tunisia and Springer (MENA Publishing Program) in Germany. It aimed to give a more concrete expression to the Euro-Mediterranean integration process by supplementing existing North-South programs and agreements with a new multilateral scientific forum that emphasizes in particular the vulnerability and proactive remediation of the Euro-Mediterranean region from an environmental point of view. This volume gives a general and brief overview on current research focusing on emerging environmental issues and challenges and its applications to a variety of problems in the Euro-Mediterranean zone and surrounding regions. It contains over five hundred and eighty carefully refereed short contributions to the conference. Topics covered include (1) innovative approaches and methods for environmental sustainability, (2) environmental risk assessment, bioremediation, ecotoxicology, and environmental safety, (3) water resources assessment, planning, protection, and management, (4) environmental engineering and management, (5) natural resources: characterization, assessment, management, and valorization, (6) intelligent techniques in renewable energy (biomass, wind, waste, solar), (7) sustainable management of marine environment and coastal areas, (8) remote sensing and GIS for geo-environmental investigations, (9) environmental impacts of geo/natural hazards (earthquakes, landslides, volcanic, and marine hazards), and (10) the environmental health science (natural and social impacts on Human health). Presenting a wide range of topics and new results, this edited volume will appeal to anyone working in the subject area, including researchers and students interested to learn more about new advances in environmental research initiatives in view of the ever growing environmental degradation in the Euro-Mediterranean region, which has turned environmental and resource protection into an increasingly important issue hampering sustainable development and social welfare.
Visa hela texten

Amjad Kallel Dr. Kallel holds a B.Eng. in Georesources and Environment (1998) from the University of Sfax (Tunisia), a M.Sc. and a Ph.D. degree in Georesources and Environment (2004) from Hokkaido University (Japan). He joined Venture Business Laboratory (VBL) at Akita University, Japan (2005-2006) as a researcher focusing on refining and recycling technologies for recovering of rare elements from natural and secondary sources. Back in Tunisia, he started working at the University of Gabes from 2006-2011 where he contributed to the elaboration of teaching programs at the Higher Institute of Water Sciences and Technologies of Gabes. Since 2011, he has started lecturing at the Sfax National School of Engineering (University of Sfax, Tunisia). There, he has been also involved in various research projects related to Environmental Geology and Environmental Geotechnics. In addition, Dr. Kallel is involved as a consultant in urban and environmental projects for the Ministry of Environment and Sustainable Development in Tunisia. In 2017 Dr. Kallel completed his Habilitation (HDR) in Environmental Science at the University of Sfax (Tunisia). He has organized many prestigious workshops, seminars and international conferences. Currently, he is supporting the editorial board of the Euro-Mediterranean Journal for Environmental Integration (Springer). In 2016 Dr. Kallel joined the Arabian Journal of Geosciences (Springer) as an Assistant Editor supporting the Editor-in-Chief. Mohamed Ksibi Dr. Ksibi is the Director of the High Institute of Biotechnology at the University of Sfax (Tunisia). Dr. Ksisi obtained his M.Sc. (1989) and PhD (1993) degrees in Applied Chemistry from the University of Poitiers (France). He also gained the Habilitation (HDR) in Chemistry from the University of Sfax, Tunisia (2003). Afterwards, he received a one-year postdoctoral research fellowship at the National Institute of Scientific and Technical Research (Tunisia, 1995) and then was appointed as an Adjunct Professor in Chemistry (1996), Assistant Professor (1999), Associate Professor (2004) and as a full Professor of Chemistry (2009) at the University of Sfax, Tunisia. His research focuses on chemicals in the environment, water and wastewater treatment and reuse. He developed new methods for toxicity assessment of water containing various pollutants (dyes, phenolic and pharmaceutical compounds, pulp and paper mills pollute water, domestic wastewater, ...etc.) after applying different wastewater treatment techniques. Dr. Ksibi has been involved in establishing several joint scientific projects with Moroccan, Portuguese, German and Japanese scientists aiming at studying the quantification and risk assessment of emerging organic contaminants and heavy metals in soil and surface waters in Tunisia. Most recently, he has been participating at the NATO-SfP project 'Remediation Processes in Uranium and other Mining Explorations'. Dr. Ksibi is currently the Managing Editor of the Euro-Mediterranean Journal for Environmental Integration (Springer). Hamed Ben Dhia Dr. Ben Dhia is currently a Professor Emeritus in the Sfax National School of Engineering (University of Sfax, Tunisia). He studied in Tunisia and then in France where he graduated and obtained his PhD in Geothermal Energy and Aquifers Modeling from the Faculty of Sciences, Bordeaux and the Mining School of Paris. His working career started from Libya in the sector of water research within the Saharan region (1973-74), continued in Morocco at the National Phosphate Company (1975-1978), and ended in Tunisia as a full Professor at the University of Sfax (1979-2012). He was active in several research projects focusing on Hydrogeology, Geothermal Energy, Environmental Sciences and Engineering Geology. He has co-published more than 180 papers at national and international journals. Furthermore, he supervised and successfully handled about 50 master and 30 doctoral theses. Dr. Ben Dhia was also appoint