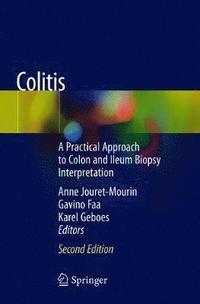 A Practical Approach to Colon and Ileum Biopsy Interpretation

av Anne Jouret-Mourin, Gavino Faa, Karel Geboes
Häftad Engelska, 2018-06-29
1149
Köp
Spara som favorit
Finns även som
Visa alla 1 format & utgåvor
This revised and updated second edition explains how to analyze endoscopic mucosal biopsies of the ileum and colon. As in the first edition, the diagnosis and follow up of colitis in general and inflammatory bowel diseases in particular is covered and this edition also includes new chapters on ileitis and optimal biopsy procedures. The basic lesions are described using multiple drawings together with an explanatory text and endoscopic and histological photographs. A review of various differential diagnostic issues and types of colitis is also included. Colitis: A Practical Approach to Colon and Ileum Biopsy Interpretation is aimed at general pathologists and pathologists in training and also gastroenterologists to help them understand how a precise diagnosis can be reached.
Visa hela texten

Anne Jouret-Mourin Anne Jouret-Mourin, MD, PhD, graduated from UCL Medical School in Brussels, Belgium, in 1977. She acquired the board certificate in anatomic pathology in 1981, and defended her PhD in 1990. She is Professor of Pathology at the School of Medicine of the Catholic University of Louvain (UCL), and is Head of the Department of Pathology at UCL Cliniques Universitaires St Luc in Brussels. Anne Jouret-Mourin was President of the Belgian Society of Pathology from 2014 to 2017. She is member of the working group of Digestive Pathology of the ESP, as well as member of the Belgian College of Oncology. Her main research topic focuses on GI pathology, including inflammatory and infectious diseases and early cancer of the upper and lower GI tract. Anne Jouret-Mourin is author and co-author of several articles and chapters in international peer-reviewed journals and books. Karel Geboes Karel Geboes, MD, PhD, AGAF, gained the Board Certificate in internal medicine in 1975 and in anatomic pathology in 1982. He is Professor Emeritus of the University of Leuven and former head of the Gastrointestinal Pathology unit of the department of pathology, University Hospital KULeuven, Belgium. He was consultant pathologist in the Department of Pathology of the University Hospital of Gent (2010-2017). He was a member of the International Organization of Inflammatory Bowel Diseases, of the working group of Digestive Pathology of the ESP and of the Consensus Working Party for the Diagnosis of Inflammatory Bowel Disease of ESP and ECCO and has been President of the Flemish Society of Gastroenterology (1997-1999). He was for many years course director or lecturer for the European School of Pathology (ESCOP) update courses in gastrointestinal pathology. His major research interests are inflammatory bowel diseases and gastrointestinal cancer. He is the author or co-author of more than 500 articles in international journals and book chapters and was a collaborator for the textbook of the WHO Classification of Tumours of the Digestive System, 4th ed 2010. Gavino Faa Gavino Faa gained his medical doctor degree in 1977 and his board certificate in anatomic pathology in 1980. He became Associate Professor in Pathology in 1986 and Full Professor of Pathology in 1994 at the University of Cagliari. In 1994 he became Head of the Department of Pathology of the University Teaching Hospital at the University of Cagliari. He was Dean of the Faculty of Medicine of the University of Cagliari from 2002 to 2008. He was President of the Italian College of Full Professors in Pathology from 2007 to 2009. He is Adjunct Professor at Temple University, Philadelphia from 2012. His major research interests are gastrointestinal and liver disease, metals in medicine, nephrogenesis, developmental pathology and fetal programming of adult kidney and brain diseases. He has been author and co-author of more than 300 articles in international journals and books.