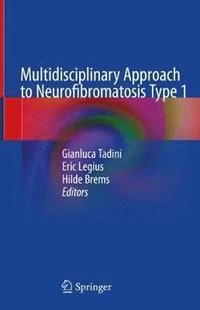 av Gianluca Tadini, Eric Legius, Hilde Brems
Inbunden Engelska, 2020-06-03
1479
Köp
Spara som favorit
Skickas inom 3-6 vardagar.
Gratis frakt inom Sverige över 159 kr för privatpersoner.
Finns även som
Visa alla 1 format & utgåvor
This volume offers an update of the clinical signs, diagnostic criteria (including molecular diagnosis) and targeted therapies for a particular type of genodermatosis, providing a handy and unique tool for early diagnosis. In recent years, our understanding of genodermatosis and neurocutaneous syndromes has increased, but although Type 1 Neurofibromatosis (NF1) is the most common neuroectodermal disorder and involves a large number of patients and medical disciplines, this syndrome remains underestimated, often misdiagnosed thus leading to inaccurate treatment. The literature on the molecular and pathogenetic aspects is ample, but current clinical approaches, classification, diagnostic criteria and treatment protocols are outdated, creating difficulties in early diagnosis and treatment. As such, a chapter is devoted renewing current diagnostic criteria; it includes clinical and molecular data, to offer a sound, updated discussion basis for a consensus conference. NF1 is a "time-dependent" disorder, meaning that the onset of clinical signs are closely linked to patient age and the book discusses this particularly neglected aspect extensively, as well as the latest molecular diagnosis techniques, which are highly sensitive have not been included in the diagnostic criteria. It also explains the role of the RAS-MAPK pathway and genotype-phenotype correlations. In addition it explores new concepts concerning the pathogenesis of neurofibromas and other hamarthomas and their relevance for a modern therapeutical approach with targeted molecular drugs, as well as newly discovered aspects of NF1 in all internal organs, together with their diagnostic counterparts. A chapter on mosaic neurofibromatosis is also included. There is a particular focus on differential diagnosis (i.e. other diseases with cafe-au-lait macules), and the recently described Legius syndrome will be presented directly by Prof Eric Legius. All chapters are easy-to-understand, up-to-date, comprehensive and concise tools and are intended for a wide range of professionals involved with genetic disorders of the skin and neurocutaneous diseases: dermatologists, pediatricians, neurologists, oncologists and general practitioners.
Visa hela texten

"The audience is dermatologists, pediatricians, neurologists, oncologists, and general practitioners. ... There are no comparable books published on this subject to my knowledge. I hope other books on serious genodermatoses will follow in this one's footsteps." (Patricia Wong, Doody's Book Reviews, December 20, 2020)

Gianluca Tadini, M.D., PhD., is a pediatric dermatologist, coordinator of the Center of Inherited Cutaneous Diseases (University of Milan) at the Pediatric Dermatology Unit, Fondazione IRCCS Ca' Granda- Ospedale Maggiore Policlinico, Milan. His main interests are genodermatoses, neuroectodermal disorders, as well as infectious and tropical diseases. After graduating cum laude from the Medical School of Surgery (University of Milan) he earned a post graduate title in Dermatology and Venereology and one in Tropical and Subtropical Diseases, both at the University of Milan. He was a resident at the Dept of Dermatology, and the Dept Dermatology and Sexually Transmitted Diseases as well as a laboratory training resident at the University of Milan, Institute of Dermatological Sciences. He is also contract professor and students' tutor at the Department of Dermatology, School of Medicine and Surgery and postgraduate School of Dermatology and Venereology, University of Milan. Since 1991 is the coordinator of the Center of Inherited Cutaneous Diseases at the Pediatric Dermatology Unit, Ospedale Maggiore Policlinico. Doctor Tadini has authored over 200 scientific papers, lectures and lessons as a visiting professor, and was a member of the International Committee for the Classification of Ectodermal Dysplasias and Ichtyoses. He has been a consultant at the Department of Pediatrics 1, University of Milan since 2011. Professor Eric Legius, M.D., PhD., is the head of the Human Genetics Department of the University of Leuven as well as the clinical director of the Human Genetics department of the University Hospital of Leuven. He has been chair of the Department of Human Genetics, and part time professor at the Faculty of Medicine, KULeuven. His research is targeted towards neurofibromatosis type 1 and related conditions. The research group contributed successfully towards our understanding of the molecular etiology of a number of tumors in NF1, such as benign neurofibromas, gastrointestinal stromal tumors (GIST), and glomus tumors. The group was also involved in the molecular and cognitive characterization of NF1 microdeletion region. Other projects include NF1-related oncogenesis (molecular study of malignant peripheral nerve sheath tumors) and a clinical trial to improve cognitive aspects in children with NF1 using Simvastatin treatment (NFSIMCODA-trial together with Erasmus University Rotterdam). In 2007 his research team identified a new condition resembling neurofibromatosis type 1, now known as Legius syndrome (autosomal dominant condition caused by a heterozygous mutation in SPRED1). The group uses animal models (mouse and Drosophila) to gain insights into the importance of SPRED and the RAS-MAPK pathway for cognition. He was awarded the Sidmar prize in 2010, an annual prize for medical research on a chronic disorder, Royal Academy of Medicine, Belgium, and the First Theodore Schwann Award, in 2012, at the 15th European Neurofibromatosis Meeting.