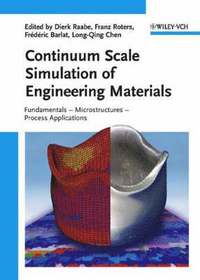 av Dierk Raabe, Franz Roters, Frederic Barlat, Long-Qing Chen
Inbunden Engelska, 2004-07-01
5169
Köp
Spara som favorit
Finns även som
Visa alla 1 format & utgåvor
Everything the reader needs to know about this hot topic in materials research - from the fundamentals to recent applications. This book addresses graduate students and professionals in materials science and engineering as well as materials-oriented physicists and mechanical engineers, providing them with information needed to judge which simulation method to use for which kind of modeling/simulation problem.
Visa hela texten

"This collection of chapters would be useful for graduate students, scientists, and engineers working in this field." (Materials and Manufacturing Processes, May 2006)

Professor Dierk Raabe received his Ph.D. (1992) and habilitation (1997) at RWTH Aachen, Germany, in the fields of Physical Metallurgy and Metal Physics. He is currently Director and Executive at the Max-Planck Institut fur Eisenforschung, Dusseldorf, Germany, after working some time as researcher at Carnegie Mellon University, USA, the High Magnetic Field Laboratory in Tallahassee, USA, and serving as senior researcher and lecturer at the Institut fur Metallkunde und Metallphysik, RWTH Aachen, Germany. His research fields are computer simulation of materials, composites, textures, and micromechanics, in which he authored more than 100 papers in peer-reviewed magazines and three books. He teaches various courses on computational materials science, materials mechanics, history of metals, and textures at RWTH Aachen (Germany) and at Carnegie Mellon University Pittsburgh (USA). His work was already awarded with several prizes, among them the Adolf-Martens Award, Masing Award, Heisenberg Award, and the Leibniz Award. Dr. Franz Roters studied Physics in Braunschweig, where he got his diploma degree in 1993. From 1994 to 1998 he was scientist at the Institute for Metal Physics and Physical Metallurgy at the RWTH Aachen. He got his PhD. degree in 1999 in the field of constitutive modelling of aluminium. From 1999 till 2000 he was researcher at the R&D centre of VAW (today Hydro Aluminium Deutschland GmbH) in Bonn. Since 2000 he is senior scientist at the Max-Planck-Institut fur Eisenforschung in Dusseldorf, where he is the leader of the research group "Theory and Simulation" in the department for Microstructure Physics and Metal Forming. Dr. Roters published more than 30 papers in the field of constitutive modelling and simulation of forming. He is head of the Technical Committee "Computersimulation" of the Deutsche Gesellschaft fur Materialkunde e.V. (DGM). Professor Long-Qing Chen is teaching Materials Science and Engineering at Penn State. He received his B.S. in Ceramics from Zhejiang University in China in 1982, a M.S. in Materials Science and Engineering from State University of New York at Stony Brook in 1985, and a Ph.D. degree in Materials Science and Engineering from MIT in 1990. He worked with Armen G. Khachaturyan as a postdoc at Rutgers University from 1990 to 1992. Professor Chen joined the Department of Materials Science and Engineering at Penn State as an assistant professor in 1992 and was promoted to associate professor in 1998. His main research interests include materials theory and computational materials science. Professor Chen received the Young Investigator Award from the Office of Naval Research (ONR) in 1995, the research creativity award from the National Science Foundation (NSF) in 1999, the Wilson Award for Excellence in Research in the College of Earth and Mineral Sciences in 2000, and the University Faculty Scholar Medal at Penn State in 2003. Dr. Frederic Barlat received a PhD in Mechanics from the "Institut National Polytechnique de Grenoble," France, in 1984. The same year, he joined Alcoa Technical Center; Pittsburgh, Pennsylvania, USA, the research facility of Alcoa Inc. (formerly the Aluminum Company of America). Dr. Barlat is currently a technology specialist in their materials science division. He is responsible for conceptualizing, importing and implementing mathematical models that predict the mechanical behavior of materials for long-term development applications in the areas of metal plasticity, fracture and material performance. His work is used for the design of alloys and processes in support of Alcoa's major business units, including packaging, automotive and aerospace. Dr. Barlat is also an invited professor at the University of Aveiro's Center for Mechanical Technology and Automation, Portugal, where he directs activities on the fundamentals of plasticity and forming. He has actively participated in the scientific committees of various international con