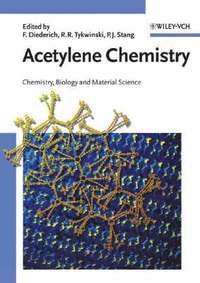 av Francois Diederich, Peter Stang, Rik R Tykwinski
Inbunden Engelska, 2005-01-01
2209
Köp
Spara som favorit
Skickas inom 5-8 vardagar.
Fri frakt inom Sverige för privatpersoner.
Acetylenes are an important and valuable class of compounds in organic synthesis. This book expands on this historically well-established concept, while incorporating the many new developments that have widened the number of applications in this field. It remains the only handbook available that embodies all the important facets of acetylene chemistry. Following the first section on synthesis, the leading authors deal with advanced materials before turning to the properties and theory of acetylenes, while a final section looks at the biological aspects. With its range of experimental procedures, this book is a practical aid for both organic and organometallic chemists, as well as for materials scientists, biochemists, and industrial chemists.
Visa hela texten

"...a 'superb book.' It remains the single volume 'user-friendly' compilation that offers a broad overview of acetylene chemistry..." (E-STREAMS, May 2006) "...I reviewed this important book with a great deal of personal interest. I was not disappointed..." (MRS Bulletin, November 2005)

Francois Diederich was born in 1952 in the Grand Duchy of Luxembourg. He received his doctoral degree in 1979 from the University of Heidelberg and subsequently pursued postdoctoral studies at the University of California at Los Angeles (UCLA). After his Habilitation at the Max-Planck-Institut fur medizinische Forschung, he joined in 1985 the Faculty of the Department of Chemistry and Biochemistry at UCLA where he became full professor in 1989. In 1992, he moved to the ETH Zurich as a member of the Department of Chemistry and Applied Biosciences. His research interests, documented in more than 420 publications, span from medicinal chemistry, with a focus on molecular recognition studies, to advanced fullerene and acetylene-based materials with novel optoelectronic properties. Rik R. Tykwinski received his BS degree from the University of Minnesota-Duluth and his PhD from the University of Utah. After postdoctoral studies at the Swiss Federal Institute of Technology (ETH), Zurich (1994-97), he joined the faculty of the University of Alberta in 1997 and is now an Associate Professor of Chemistry. He has published over 75 research papers, most of which describe the synthesis and unique properties of acetylenic molecules. Peter J. Stang is professor at the university of Utah. Beside many other prices he has received the American Chemical Society George A. Olah Award in Hydrocarbon Chemistry, 2003, the Robert W. Parry Teaching Award in Chemistry, 2000 and the American Chemical Soc. James Flack Norris Award in Physical-Organic Chemistry in 1998. Stang is the author or co-author of 370 scientific publications, including six monographs and two dozen reviews.