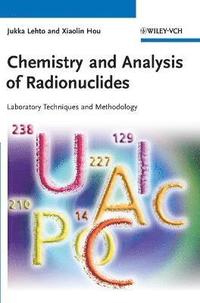 Chemistry and Analysis of Radionuclides

av Jukka Lehto, Xiaolin Hou
Inbunden Engelska, 2010-11-24
979
Köp
Spara som favorit
Finns även som
Visa alla 2 format & utgåvor
Written by chemists for chemists, this is a comprehensive guide to the important radionuclides as well as techniques for their separation and analysis. It introduces readers to the important laboratory techniques and methodologies in the field, providing practical instructions on how to handle nuclear waste and radioactivity in the environment.
Visa hela texten

"So if you have chosen this book because of its promising subtitle Laboratory Techniques and Methodology you will not be disappointed. (J Radioanal Nucl Chem, 23 September 2011)

Professor Jukka Lehto is the head of the Laboratory of Radiochemistry at the Department of Chemistry, University of Helsinki. He attained his PhD degree in 1987 at the University of Helsinki. Since 1980 he has worked as a teaching assistant, senior lecturer at the University of Helsinki, visiting researcher at Texas A&M University, USA, senior research fellow of the Academy of Finland, acting professor and since 2005 as a professor in radiochemistry. Professor Lehto's main research areas have been nuclear waste management and disposal, and environmental radioactivity studies. He has published 160 scientific and technical papers and patents, and also published a book on the principles of radioactivity and radiochemistry in Finnish. Xiaolin Hou obtained his PhD degree in nuclear and radioanalytical chemistry from the Chinese Academy of Sciences in 1997. He joined Riso National Laboratory, Denmark, in 1998 (in 2007 Riso became part of the Technical University of Denmark), and has been a senior scientist there since 2003. His primary research interests are radiochemical and speciation analysis of radionuclides, nuclear and radioanalytical techniques, environmental radioactivity, radiotracer application, radiolabeling and protein adsorption on surfaces. Dr. Hou has authored/co-authored more than 110 research articles in peer reviewed scientific journals and 7 book chapters.