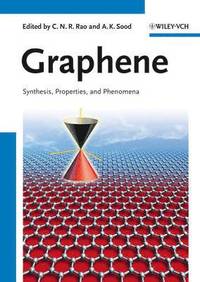 av C N R Rao, Ajay K Sood
Inbunden Engelska, 2012-12-19
1359
Köp
Spara som favorit
Skickas inom 7-10 vardagar.
Gratis frakt inom Sverige över 159 kr för privatpersoner.
Finns även som
Visa alla 2 format & utgåvor
Since its discovery in 2004, graphene has been a great sensation due to its unique structure and unusual properties, and it has only taken 6 years for a Noble Prize to be awarded for the field of graphene research. This monograph gives a well-balanced overview on all areas of scientific interest surrounding this fascinating nanocarbon. In one handy volume it offers comprehensive coverage of the topic, including chemical, materials science, nanoscience, physics, engineering, life science, and potential applications. Other graphene-like, inorganic layered materials are also discussed. Edited by two highly honored scientists, this is an invaluable companion for inorganic, organic, and physical chemists, materials scientists, and physicists. From the Contents: * Synthesis, Characterization, and Selected Properties of Graphene * Understanding Graphene via Raman Scattering * Physics of Quanta and Quantum Fields in Graphene * Graphene and Graphene-Oxide-Based Materials for Electrochemical Energy Systems * Heterogeneous Catalysis by Metal Nanoparticles supported on Graphene * Graphenes in Supramolecular Gels and in Biological Systems and many more
Visa hela texten

This book will be useful to students, teachers, and researchers in material science interested in learning about and taking part in the exciting developments based on graphene. (IEEE Electrical Insulation Magazine, 1 January 2014)

C.N.R. Rao obtained his Ph.D. from Purdue University and D.Sc. from Mysore University as well as 53 honorary doctorate degrees from various universities. C.N.R. Rao is National Research Professor & Linus Pauling Research Professor at Jawaharlal Nehru Centre for Advanced Scientific Research and Honorary Professor at the Indian Institute of Science. His main research interests are in solid state and materials chemistry including nanomaterials. He is a member of numerous science academies worldwide and has received many national and international honors. In particular, he is the recipient of the Dan David Prize as well as the Illy Trieste Science Prize for Materials research besides the August von Wilhelm Hoffmann medal from the German Chemical Society. He has published over 1400 research papers and 45 books. A.K. Sood is Professor in the Department of Physics at the Indian Institute of Science, Bangalore. He holds the prestigious Bhatnagar Chair of CSIR and is currently the President of the Indian Academy of Sciences. His research interests include physics of nano-systems like nanotubes and graphene and physics of soft condensed matter. He has published more than 300 papers in refereed international journals and holds a few international patents. His work has been recognized by way of many honors and awards. These include Fellowships of The Indian National Science Academy, The National Academy of Sciences, India and The World Academy of Sciences (TWAS), Shanti Swaroop Bhatnagar Prize and National Award in Nanoscience and Nanotechnology by The Department of Science and Technology of India.