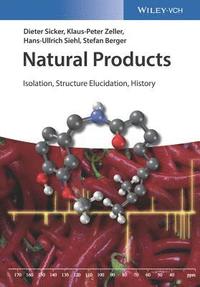 av Dieter Sicker, Klaus-Peter Zeller, Hans-Ullrich Siehl, Stefan Berger
Häftad Engelska, 2019-01-30
839
Köp
Spara som favorit
Skickas inom 5-8 vardagar.
Fri frakt inom Sverige för privatpersoner.
Written by experienced authors, this book presents numerous natural everyday products with a high range of structural diversity. Twenty natural products have been arranged in five sections, describing three alkaloids, five colored compounds, three carbohydrates and glycosides, seven terpenoids, and two aromatic compounds. Adopting a highly didactical approach, each chapter features a uniform structure: Background, in-depth information about isolation processes and structural characterization as well as a Q&A section at the end. Alongside the theoretical information many practical hints for the laboratory work are also included. A comprehensive overview of UV-, IR- and NMR-spectroscopy as well as mass-spectrometry for every exemplified compound is provided and the understanding of these methods is supported by concluding questions and exercises. Educating and entertaining, this full-color textbook turns the learning process into a real pleasure, not only for students in natural products chemistry but also experienced professionals.
Visa hela texten

"This is an outstanding book that should be on the shelves of all chemists. I can best summarise it by reproducing part of Wiley's description on the rear cover "Educating and entertaining this full-colour textbook turns the learning process into a real pleasure, not only for students in natural products chemistry but also experienced professionals"." Edlard R. Adlard, Chromatographia (2019) 82:1425

As a boy, Dieter Sicker, born in 1954 in Chemnitz, was intrigued by the phenomena of material transformations in the kitchen. However, later, he decided to become a chemist rather than a cook. He is convinced that the manifold knowledge gained in the isolation of natural products is helpful for any organic chemist. Working as a lecturer and a practical supervisor at the Institute of Organic Chemistry at the University of Leipzig, he was awarded the title apl. professor in 1997. He is fond of presenting experimental shows in which the beauty of chemistry is both shown and explained to the public. Klaus-Peter Zeller, born in 1944 in Baden-Baden, worked several years as technician before he could realise his dream to study chemistry. In 1972 he received his doctoral degree from the University of Tubingen. After postdoctoral work at the Heriot-Watt University Edinburgh he returned to Tubingen where he became Professor in 1983. His research and teaching interests focus on reaction mechanisms, photochemistry, mass spectrometry, and more recently science history. In 1968 Hans-Ullrich Siehl started chemistry studies at the University of Tubingen during, the peak years of student movement and protest. The structural formula of Astaxanthin was the required answer to the 1973 organic chemistry diploma question, why the color of the lobster change to red on cooking. After his PhD thesis on vinyl cations with Prof. M. Hanack at the University of Saarbrucken he enjoyed eating lobster at weekends in Maine during his postdoctoral work on Isotope eff ects with Prof. M. Saunders at Yale University, Connecticut, 1979. After his Habilitation on NMR spectroscopy of reactive carbocations in Tubingen in 1987 he enjoyed Japanese dishes during a one-year JSPS guest professorship at Kyushu University, Japan. At Ulm University since 1995 his main interests in experimental physical organic chemistry and NMR spectroscopy were successively expanded and complemented by quantum chemical methods such as computational NMR spectroscopy. Stefan Berger was intrigued by NMR after having won a bottle of beer during an introductory course in organic NMR led by Prof. H. Suhr at the University of Tubingen in 1968. After completing a PhD thesis with Prof. Anton Rieker, in 1973 he joined Prof. J. D. Roberts at Caltech for postdoctoral work, where he also met Prof. D.M. Grant and Prof. D. Seebach, who were then guest professors in Pasadena. This period was decisive to try a Habilitation in NMR spectroscopy, which was achieved at the University Marburg. At the University Leipzig his aim is to combine methodological development of NMR and its application to bioorganic problems.

Preface 3 Chapter 1. Alkaloids 9 1.1 Pseudopelletierine From the root-bark of the pomegranate tree 9 1.2 Colchicine From the seeds of the autumn crocus 29 1.3 Capsaicin From Kenyan "African Bird's Eye Chilies" 49 Chapter 2. Coloured Compounds 69 2.1 Thymoquinone From the oil of the seeds of black caraway 69 2.2 Berberine Chloride From the bark of the common barberry 89 2.3 Carminic acid From dried cochineal 109 2.4 Safflomin A From flowers of the safflower 129 2.5 Chlorophyll a From deep frozen spinach leaves 151 Chapter 3. Carbohydrates and Glycosides 175 3.1 Raffinose From the seeds of blue lupins 175 3.2 Fraxin From the shredded bark of the ash tree 195 3.3 Stevioside From the dried leaves of Stevia rebaudiana 215 Chapter 4. Terpenoids 235 4.1 Linalool From Brazilian rosewood oil 235 4.2 Camphor From camphor tree oil 255 4.3 Cantharidin From Spanish fly Lytta vesicatoria 275 4.4 Artemisinin From the dried leaves of the annual mugwort 291 4.5 Diosgenin From an extract of the roots of Mexican yams 311 4.6 Friedelin From cork from the bark of the cork-oak 331 4.7 Boswellic acid From frankincense, the resin of the Arabian olibanum tree 353 Chapter 5. Aromatic Compounds 375 5.1 Sinensetin From cold-pressed orange oil 375 5.2 Rosmarinic acid From the dried leaves of lemon balm 391 Chapter 6. Quantum Chemical Calculation 411 Appendix 417 Spectroscopic Experiments 417 External Photographic Credits 418 Text Credits 419 Chemical Substance Index 421 General Subject Index 424 Name Index 432