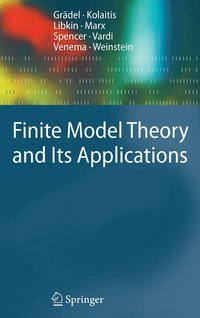 Finite Model Theory and Its Applications

av Erich Gradel, Phokion G Kolaitis, Leonid Libkin, Maarten Marx, Joel Spencer
Inbunden Engelska, 2003-07-01
1129
Köp
Spara som favorit
Skickas inom 10-15 vardagar.
Fri frakt inom Sverige för privatpersoner.
Finns även som
Visa alla 2 format & utgåvor
Finite model theory,as understoodhere, is an areaof mathematicallogic that has developed in close connection with applications to computer science, in particular the theory of computational complexity and database theory. One of the fundamental insights of mathematical logic is that our understanding of mathematical phenomena is enriched by elevating the languages we use to describe mathematical structures to objects of explicit study. If mathematics is the science of patterns, then the media through which we discern patterns, as well as the structures in which we discern them, command our attention. It isthis aspect oflogicwhichis mostprominentin model theory,"thebranchof mathematical logic which deals with the relation between a formal language and its interpretations". No wonder, then, that mathematical logic, and ?nite model theory in particular, should ?nd manifold applications in computer science: from specifying programs to querying databases, computer science is rife with phenomena whose understanding requires close attention to the interaction between language and structure. This volume gives a broadoverviewof some central themes of ?nite model theory: expressive power, descriptive complexity, and zero-one laws, together with selected applications to database theory and arti?cial intelligence, es- cially constraint databases and constraint satisfaction problems. The ?nal chapter provides a concise modern introduction to modal logic,which emp- sizes the continuity in spirit and technique with ?nite model theory.
Visa hela texten

From the reviews: "This book has its origins in a workshop held in Philadelphia in 1999 ... . The chapters are of an expository nature, each one providing an excellent starting point to explore the research literature in the relevant topic. ... I found it to be a more accessible introduction to the subject ... and a useful starting point for graduate students entering the subject. ... This will appeal ... to those readers trained in classical traditions of logic who wish to approach the subject." (Anuj Dawar, Mathematical Reviews, Issue 2009 i)