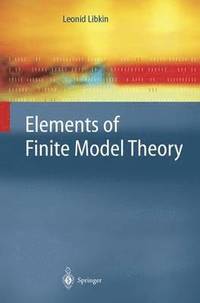 From the reviews: Model theory is the study of the logical properties of mathematical structures. Finite model theory arises when we focus our attention on finite structures, such as finite graphs (graphs with a finite number of nodes). This book presents the most important results of finite model theory in an extremely readable, yet careful and precise manner. Libkin himself is a master of the art, and this shows in his beautiful presentation of the material. Ronald Fagin Manager, Foundations of Computer Science, IBM Almaden Research Center, San Jose, CA "This book is an introduction to finite model theory which stresses the computer science origins of the area. ... In addition to presenting the main techniques ... the book deals extensively with applications in databases, complexity theory, and formal languages, as well as other branches of computer science. ... This book can be used both as an introduction to the subject, suitable for a one- or two-semester graduate course, or as reference for researchers who apply techniques from logic in computer science." (PHINEWS, Vol. (7), 2005) "Libkin has managed to produce an interesting treatment, in spite of the competition ... . I particularly liked the chapter on the locality of first order (FO) logic ... . there is an excellent chapter on FO model checking. I liked the careful distinction between data, expression, and combined and fixed parameter complexity. ... In summary, I welcome Libkin's book as an interesting text from the database point of view." (K. Lodaya, Computing Reviews, April, 2005) "Connections have emerged between finite model theory and various areas in combinatorics and computer science ... . Leonid Libkin's new book ... is a beautiful introduction to these developments ... . The exposition is lucid throughout ... . The book is self-contained and makes an ideal text for self-study or for a 'topics in logic course' ... . A noteworthy feature of the book from this perspective is its wealth of exercises ... . Elements of Finite Model Theory is a wonderful text ... ." (Steven Lindell and Scott Weinstein, Journal of Logic, Language and Information, Vol. 16 (2), 2007) "The present book stands out by its broadness of topics (while staying within the confines of finite model theory), its detailed exposition (with great attention to the relationships between the different topics), and its inclusion of more recent results and trends. This book provides the best overview of the field to date. ... Every chapter ends with a set of exercises ... . The book can be used as a research reference as well as for teaching at the advanced graduate level." (Jan G. Van den Bussche, Mathematical Reviews, Issue 2007 a) "Finite model theory is the study of the expressive power and, more generally, the behaviour of logics on finite structures. ... The audience of the book, as intended by the author, is formed by theoretical computer scientists. ... This excellent book will be a great help for teachers and students of finite model theory, but also for researchers in other fields of mathematics or computer science that want to gain familiarity with the most important concepts and results from finite model theory." (Heribert Vollmer, Zentralblatt MATH, Vol. 1060, 2006)