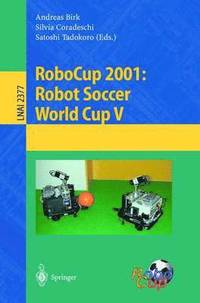 av Andreas Birk, Silvia Coradeschi, Satoshi Tadokoro
Häftad Engelska, 2002-07-01
1279
Köp
Spara som favorit
Skickas inom 10-15 vardagar.
Fri frakt inom Sverige för privatpersoner.
RoboCup 2001, the Fifth Robot World Cup Soccer Games and Conferences, was held from August 2-10, 2001, at the Washington State Convention and Trade Center in Seattle, USA. Like the previous international RoboCup events - RoboCup 97 in Nagoya, Japan; RoboCup 98 in Paris, France; RoboCup 99 in Stockholm, Sweden; and RoboCup 2000 in Melbourne, Australia - RoboCup 2001 included a symposium as well as several robotic competitions. Both parts, the symposium and the tournaments, are documented in this book. The symposium received over 80 submissions of which 18 were selected for full presentation, i. e. , a talk at the symposium and a 10-page contribution to this book, and 40 were selected as posters, i. e. , a poster presentation at the s- posium and a 6-page contribution to this book. Among the full presentations, ?ve were selected as ?nalists for the Scienti?c and the Engineering Challenge Awards. These ?ve papers are presented separately in the second chapter of this book. The Scienti?c Challenge Award went to the contribution "A Control Method for Humanoid Biped Walking with Limited Torque" by Fuminori - masaki, Ken Endo, Minoru Asada, and Hiroaki Kitano. The Engineering Ch- lenge Award was given to the paper "A Fast Vision System for Middle Size Robots in RoboCup" by M. Jamzad, B. S. Sadjad, V. S. Mirrokni, M. Kazemi, R. Ghorbani, A. Foroughnassiraei, H. Chitsaz, and A. Heydarnoori. The s- posium also featured an invited talk by Prof.
Visa hela texten