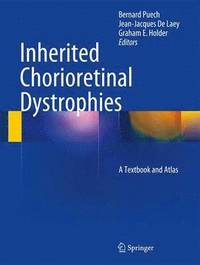 A Textbook and Atlas

Bernard Puech, MD, is Consultant Ophthalmologist in the Service d'Exploration Fonctionnelle de la Vision et Neuro-ophtalmologie at the Centre Hospitalier Regional Universitaire, Hopital Roger Salengro, Lille Cedex, France. He has published extensively on ophthalmic genetics. Jean-Jacques de Laey, MD, PhD, is Emeritus Professor of Ophthalmology at Ghent University, Belgium. He is Vice-President of the International Council of Ophthalmology until April 2014 and a Board Member of the ICO Foundation. Professor de Laey is one of the Founders of the European Society for Retina Specialists, of EUPO (European University Professors in Ophthalmology), and of EVER (European Vision and Eye Research). He is the author of 5 books and has published over 250 papers, mainly on medical retina. Graham E. Holder, PhD, has been Director of Electrophysiology and Consultant Electrophysiologist at Moorfields Eye Hospital, London, since 1995. Professor Holder's early publications related to VEPs, but he has subsequently focused on retinal disease. He has authored over 190 peer-reviewed publications as well as over 35 book chapters, and has also co-authored a CDROM. He is a co-author the American Academy of Ophthalmology monograph on Clinical Visual Electrophysiologic Testing. He was awarded an Honorary Professorship of University College London, at the Institute of Ophthalmology, in 2007, and of the University of Sydney, at Sydney Medical School, in 2013. Professor Holder was joint recipient of a prestigious Alcon award in 2010. He is a past President of EVER, the European Association for Vision and Eye Research, and has been Director of Education of the International Society for Clinical Electrophysiology of Vision (ISCEV) since 2001.