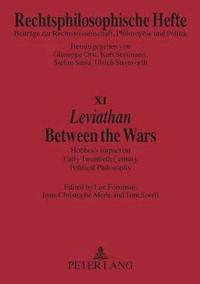 Leviathan Between the Wars

av Luc Foisneau, Jean-Christophe Merle, Professor Tom Sorell
Häftad Engelska, 2005-06-01
529
Köp
Spara som favorit
Skickas inom 3-6 vardagar.
Fri frakt inom Sverige för privatpersoner.
The symbol of the Leviathan came to the forefront in political theory, as the structure and the ideological justification of the state underwent radical change in at least three European countries from the early 1920s to the 1940s. Thus, the terrifying image of Leviathan has sometimes given rise to a surprising historiography of twentieth-century totalitarian states, tracing them back to the origins of modern political thought, as if there were a direct line of descent from Hobbes to Mussolini, Hitler and Stalin, or, worse still, as if Hobbes's Leviathan (1651) were an exact anticipation of twentieth-century political catastrophes. The differing interpretations of Hobbes proposed by Strauss, Tonnies, Schmitt, Vialatoux, Capitant, Pareto, Collingwood, and Oakeshott, are here interpreted in the perspective of the interwar transformation of Europe. The contributors, who are German, British and French political philosophers, analyse the conditions which have made possible conflicting readings of Hobbes's political philosophy, and explain why they sometimes don't do justice to Leviathan.
Visa hela texten

Bloggat om Leviathan Between the Wars