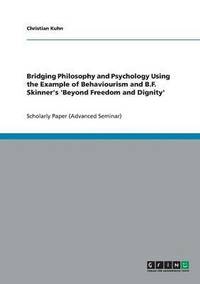 Bridging Philosophy and Psychology Using the Example of Behaviourism and B.F. Skinner's 'Beyond Freedom and Dignity'

av Christian Kuhn
Häftad Engelska, 2007-06-01
239
Köp
Spara som favorit
Skickas inom 10-15 vardagar.
Gratis frakt inom Sverige över 159 kr för privatpersoner.
Scholarly Paper (Advanced Seminar) aus dem Jahr 2004 im Fachbereich Anglistik - Anderes, einseitig bedruckt, Note: 1 (A), Otto-von-Guericke-Universität Magdeburg (Institute for Foreign Language Philology), Veranstaltung: The Beautiful and the Sublime, Sprache: Englisch, Anmerkungen: The paper is a philosophical discussion of the psychological school of Behaviourism, relating the philosophical ideas of B. F. Skinner to early English empisicists, John Locke and David Hume. Including facts towards Behaviourism and Empirism, also comprising a summary of B. F. Skinner's "Beyond Freedom and Dignity". , Abstract: It seems impossible to give a precise definition of the term philosophy and the teachings that are connected with it. Generally, philosophers' concerns are questions for the reason and the origin of all being. In a way, these questions unite all of today's arts subjects. As an effect, though, the boundaries between arts often become blurred, all the more since psychology from the early ancient world until the 19th century has merely been regarded as a philosophical field. With the emancipation of psychology as a scientific discipline on its own, teachings were partly in opposition to the traditional way of thinking, if being based on empirical evidence rather than theoretical considerations. Thus, fundamentals of human psyche happen to become a somewhat delicate matter.With this paper I have touched philosophical and psychological problems using the example of B. F. Skinner's "Beyond Freedom and Dignity", trying to show the relationship and the margins of both fields.The author - Burrhus Frederick Skinner (1904-1990) - is regarded one of the most radical 'scientists' among all psychologists. Skinner counts for a distinguished representative of a psychological theory that strongly tries to separate psychological findings from anything experimentally unobservable - (American) behaviourism. Nevertheless, Skinner's book Beyond Freedom and Dignity of 1971 largely leaves out any details of experimental analysis and therefore approaches the question of 'What is man?' in a rather philosophical manner. The book represents a philosophical view on man from a behaviouristic perspective, providing a technology of behaviour to solve the problems of mankind. An approach that seems absurd but that mirrors the distinguished image of man of one of the most influential psychologists of the 20th century.In fact, psychological authors rarely refer to Skinner's Beyond Freedom and Dignity because it does not directly relate to his psychological experiments. However, this paper principally serves to outline a psychologist's attitude concerning the study of human behaviour in a philosophical context. That is, bridging philosophy and psychology using the example of behaviourism, moreover sketching the parallels between early empiricists and early behaviourists, providing a basic understanding for conceptual scientific ways of thinking. This also offers an unadulterated understanding of Skinner's views, showing that behaviourism is prone to be discussed philosophically.
Visa hela texten