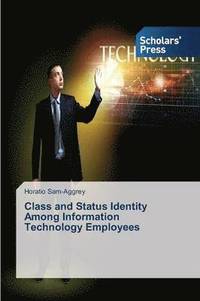 av Sam-Aggrey Horatio
Häftad Engelska, 2013-08-04
1039
Köp
Spara som favorit
Skickas inom 10-15 vardagar.
Fri frakt inom Sverige för privatpersoner.
This book reports on research about the class and status identities exhibited by different levels of information technology employees in St John's,Newfoundland,Canada. An important finding of this research is that significant differences exist in the organization of work and the labour market situations experienced by different levels of IT employees. This study also revealed a strong relationship between the objective class position of interviewees and attitudes that can form the basis of rudimentary class consciousness. However,these fundamental bases of class consciousness are not developed into a coherent class consciousness. As a result,class consciousness was found to be fragmentary among these employees.In terms of status,the majority of interviewees in each of the occupational stratum believe that descendants of the merchant class who controlled the fishery sector in the 19th century possess high status positions because of the power and wealth they had accumulated over the years. Another finding is status inequality between people originating from the outports compared to those from St John's. Hence local factors appear to play an important role in identity formation.
Visa hela texten