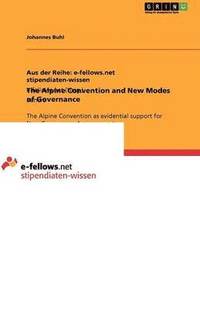 The Alpine Convention and New Modes of Governance

The Alpine Convention as evidential support for New Governance Arrangements

av Johannes Buhl
Häftad Tyska, 2011-06-27
199
Köp
Spara som favorit
Skickas inom 5-8 vardagar.
Fri frakt inom Sverige för privatpersoner.
Studienarbeit aus dem Jahr 2009 im Fachbereich Politik - Internationale Politik - Klima- und Umweltpolitik, Note: 1,0, Otto-Friedrich-Universitt Bamberg (Marie Curie Chair in Public Policies), Veranstaltung: New Modes of Governance, Sprache: Deutsch, Abstract: The concept of Governance has recently become one of the most popular in contemporary political science and at the same time it is as highly debated as desired to become a useful mode of problem-solving.
The aim of this paper is not to contribute to the theoretical discourse about Governance in first case, but to have a closer look on the applicability of Governance by trying to give evidential support. In other words: This paper is trying to contribute deductively to the Governance approach by examining an empirical case in order to derive theoretical implications.
The following will have a closer look on the Alps as a European region to examine a particular arrangement - the Alpine Convention. What is it? How is it realized and who is involved? What kind of arrangement is it in detail? Is it an empirical case of a Governance arrangement and if so, which implications may be derived for theoretical contribution?
Therefore the Alpine Convention in connection with the Alpine Towns of the Year Association will be presented as an appropriate arrangement of multi-level Governance. Hence, the main goal of this paper is to discuss to what extent this project can be considered as a Governance arrangement and what implications emerge from its argumentation for the Governance concept as a whole. The core hypothesis of the following is that this arrangement can be regarded as a Governance arrangement and that it provides certain proposals to its practical applicability.
To do so, it is first and foremost needed to display the mentioned project which serves as an evidence for applied Governance arrangements in the European hemisphere. In addition, it is necessary to explain what this paper understands Governance to be
Visa hela texten

Bloggat om The Alpine Convention and New Modes of Go...