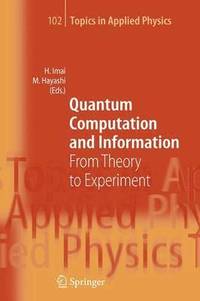 From Theory to Experiment

From the reviews: "Edited and written by leading research scientists in the field concerned, each volume contains review contributions covering the various aspects of the topic. ... Topics in Applied Physics is addressed to all scientists at universities and in industry who wish to obtain an overview and to keep abreast of advances in applied physics. ... What a splendid book in form, treatment and selection of topics! It will quickly become recognized as the authoritative work on quantum computation and information ... ." (Current Engineering Practice, 2007)

Hiroshi Imai was born in 1958 at Kobe, Japan. He obtained B.Eng. in Mathematical Engineering, and M.Eng. and D.Eng. in Information Engineering, University of Tokyo in 1981, 1983 and 1986, respectively. In 1986-1990, he was an associate professor of Department of Computer Science and Communication Engineering, Kyushu University. He was also a visiting associate professor at School of Computer Science, McGill University in 1987 and a visiting scientist at IBM T. J. Watson Research Center in 1988. Since 1990, he joined Department of Information Science, University of Tokyo. He is now a professor in Department of Computer Science, Univeristy of Tokyo. He has been a project leader of ERATO Quantum Computation and Information Project, JST from 2000. His research interests include quantum information science, algorithmics, computational geometry, and optimization. Masahito Hayashi was born in Japan in 1971.He received the B. S. degree from Faculty of Sciences in Kyoto University, Japan, in 1994 and the M. S. and Ph. D. degrees in Mathematics from Kyoto University, Japan, in 1996 and 1999, respectively. He worked in Kyoto University as a Research Fellow of the Japan Society of the Promotion of Science from 1998 to 2000,and worked in the Laboratory for Mathematical Neuroscience, Brain Science Institute, RIKEN from 2000 to 2003.In 2003, he joined Quantum Computation and Information Project, ERATO, JST as the Research Head. He also works in Superrobust Computation Project Information Science and Technology Strategic Core (21st Century COE by MEXT) Graduate School of Information Science and Technology. The University of Tokyo as Adjunct Associate Professor from 2004. He is an Editorial Board of International Journal of Quantum Information, and is the author of Quantum Information Theory, which will be published from Springer in this March. He also edited "Asymptotic Theory of Quantum Statistical Inference: Selected Papers" (World Scientific 2005) and Special Issue of EQIS'03 conference in International Journal of Quantum Information. His research interests include quantum information theory and quantum statistical inference.