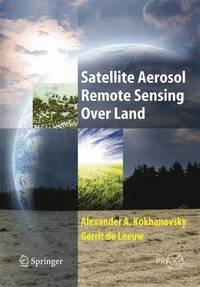 av Alexander A Kokhanovsky, Gerrit De Leeuw
Häftad Engelska, 2010-11-10
1799
Köp
Spara som favorit
Skickas inom 10-15 vardagar.
Fri frakt inom Sverige för privatpersoner.
Beställ boken senast måndag 30 november för leverans innan julafton
Finns även som
Visa alla 2 format & utgåvor
Aerosols have a significant influence on the Earth's radiation budget, but there is considerable uncertainty about the magnitude of their effect on the Earth's climate. Currently, satellite remote sensing is being increasingly utilized to improve our understanding of the effect of atmospheric aerosols on the climate system. Satellite Aerosol Remote Sensing Over Land is the only book that brings together in one volume the most up-to-date research and advances in this discipline. As well as describing the current academic theory, the book presents practical applications, utilizing state-of-the-art instrumentation, invaluable to the work of environmental scientists. With contributions by an international group of experts and leaders of correspondent aerosol retrieval groups, the book is an essential tool for all those working in the field of climate change.
Visa hela texten

From the reviews: "This collective monograph includes twelve in-depth review chapters contributed by experts in various aspects of the discipline of aerosol remote sensing over land using passive measurement techniques. ... The book is beautifully produced and contains many color illustrations imbedded in the respective chapters ... . This excellent and timely book is a must for any research or university library and a valuable addition to the personal library of any researcher or graduate student specializing in aerosol science, atmospheric radiation, and remote sensing." (Michael I. Mishchenko, Journal of Quantitative Spectroscopy & Radiative Transfer, Vol. 111 (1), January, 2010)

Alexander Kokhanovsky: For the last two decades Dr Alexander Kokhanovsky has worked in the Laboratory of Light Scattering Media Optics in the Institute of Physics in Minsk. He is currently working with the SCIAMACHY algorithm development team at the Institute of Environmental Physics in Bremen (Germany). The main thrust of the research is the development of new cloud retrieval algorithms for water and ice clouds as seen by the spectrometer SCIAMACHY (in space from 2002). He is the editor of three volumes of Light Scattering Reviews - 1, 2 and 3 (the latter is due in January 2008), and is the author of several Springer Praxis books, including: Light Scattering Media Optics (1999, 2001, 2004), Polarization Optics of Random Media (2003), Cloud Optics (2006) and Aerosol Optics, due in November 2007. Gerrit de Leeuw: Following professorships at the Universities of Sunderland and Leeds in the UK, Professor Gerrit de Leeuw was appointed professor at the University of Helsinki in 2007. He currently works at both that university and the Finnish Meteorological Institute (FMI) and is also Associate Editor to the AGU Journal of Geophysical Research - Atmospheres. His primary interest is in the physical processes in the atmosphere, with applications in the fields of radiative effects of the atmosphere (climate), pollution (air and water: effect on eco-systems and air quality) and atmospheric effects on electro-optical systems performance. Gerrit de Leeuw's main expertise is in the field of the physics of air-sea exchange: aerosols, gases (in particular CO2), momentum, heat and water vapor. He has contributed to many international and multidisciplinary field and laboratory experiments and his remote sensing expertise has frequently been called upon for ESA and EU projects, both as regards instrument development and applications to climate change and air quality.