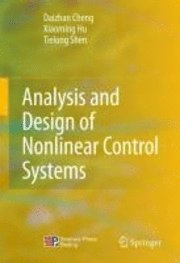 av Daizhan Cheng, Xiaoming Hu, Tielong Shen
Inbunden Engelska, 2010-03-01
1119
Bevaka
Spara som favorit
Tillfälligt slut – klicka "Bevaka" för att få ett mejl så fort boken går att köpa igen.
"Analysis and Design of Nonlinear Control Systems" provides a comprehensive and up to date introduction to nonlinear control systems, including system analysis and major control design techniques. The book is self-contained, providing sufficient mathematical foundations for understanding the contents of each chapter. Scientists and engineers engaged in the field of Nonlinear Control Systems will find it an extremely useful handy reference book. Dr. Daizhan Cheng, a professor at Institute of Systems Science, Chinese Academy of Sciences, has been working on the control of nonlinear systems for over 30 years and is currently a Fellow of IEEE and a Fellow of IFAC, he is also the chairman of Technical Committee on Control Theory, Chinese Association of Automation.
Visa hela texten

From the reviews: "This book presents a comprehensive introduction to theory and design techniques for nonlinear control systems, with an emphasis on the geometric approach. The book is intended to serve as a reference for control scientists and control engineers, as well as Ph.D. students majoring in automation and related fields, such as operational research, management, and communications." (IEEE Control Systems Magazine, Vol. 30, December, 2010) "This book is intended to provide readers ... a complete and up-to-date presentation of the geometric approach to nonlinear control systems and its design techniques. Particular attention is given to new topics, new results, and new design techniques. ... An effort has been made to make the concepts understandable for engineers or readers not specializing in mathematics; for instance, new concepts are defined initially in local coordinates and later for general topological spaces or manifolds, elementary proofs are presented and some proofs have been simplified." (Anna Maria Perdon, Mathematical Reviews, Issue 2012 f)