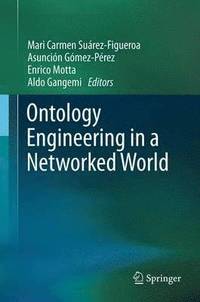 Ontology Engineering in a Networked World

av Mari Carmen Suarez-Figueroa, Asuncion Gomez-Perez, Enrico Motta, Aldo Gangemi
Inbunden Engelska, 2012-03-24
699
Köp
Spara som favorit
Skickas inom 3-6 vardagar.
Fri frakt inom Sverige för privatpersoner.
Finns även som
Visa alla 2 format & utgåvor
The Semantic Web is characterized by the existence of a very large number of distributed semantic resources, which together define a network of ontologies. These ontologies in turn are interlinked through a variety of different meta-relationships such as versioning, inclusion, and many more. This scenario is radically different from the relatively narrow contexts in which ontologies have been traditionally developed and applied, and thus calls for new methods and tools to effectively support the development of novel network-oriented semantic applications. This book by Suarez-Figueroa et al. provides the necessary methodological and technological support for the development and use of ontology networks, which ontology developers need in this distributed environment. After an introduction, in its second part the authors describe the NeOn Methodology framework. The book's third part details the key activities relevant to the ontology engineering life cycle. For each activity, a general introduction, methodological guidelines, and practical examples are provided. The fourth part then presents a detailed overview of the NeOn Toolkit and its plug-ins. Lastly, case studies from the pharmaceutical and the fishery domain round out the work. The book primarily addresses two main audiences: students (and their lecturers) who need a textbook for advanced undergraduate or graduate courses on ontology engineering, and practitioners who need to develop ontologies in particular or Semantic Web-based applications in general. Its educational value is maximized by its structured approach to explaining guidelines and combining them with case studies and numerous examples. The description of the open source NeOn Toolkit provides an additional asset, as it allows readers to easily evaluate and apply the ideas presented.
Visa hela texten

"This book contributes to putting ontological engineering in a more realistic environment: out of the labs and into the real world (wide web), where reuse and inter-relationships are more the rule than exceptions." - from the foreword by Dr. V. Richard Benjamins

Mari Carmen Suarez-Figueroa is a senior researcher at the Ontological Engineering Group (OEG) at Universidad Politecnica de Madrid (UPM), and also a teaching assistant of the Artificial Intelligence Department at the UPM's Facultad de Informatica. Her research activities include methodologies for ontology (network) development, ontology (network) development, ontology design patterns, ontology development tools, ontology evaluation, Linked Data and the Semantic Web. She has participated in different European and Spanish research projects and co-organized different workshops and tutorials in the ontology engineering field. Asuncion Gomez-Perez is a full professor and Director of the Ontological Engineering Group (OEG) at the UPM, and also Director of the Artificial Intelligence Department at the UPM's Facultad de Informatica. Her main research areas are ontological engineering, Semantic Web and knowledge management. She has published more than 150 papers and is the author of two books in these fields. In addition, Asuncion has been Co-Director of the International Summer School on Ontological Engineering and the Semantic Web since 2003. Enrico Motta is professor of Knowledge Technologies at the Knowledge Media Institute (KMi) of The Open University in the UK. He is one of the leading scientists in Semantic Technologies and the author of more than 200 peer-reviewed publications. He has acted as an advisor to several national and international organizations for strategic research programs in a variety of countries, including the US, UK, Italy, the Netherlands, Austria, Estonia, Finland, and Switzerland, and he has also collaborated with several major organizations, including Nokia, Rolls Royce, Fiat, Philips, and the United Nations. Lastly, Enrico is founder and Director of the International Summer School on Ontology Engineering and the Semantic Web. Aldo Gangemi is a senior researcher at the CNR Institute of Cognitive Sciences and Technology in Rome, and head of the Semantic Technology Lab, where he has worked in medical informatics, knowledge engineering, semantic technologies, and the Semantic Web. His research focuses on pattern-based ontology design, semantic social networks, hybridization of NLP, lexical and semantic resources, and meta-models for heterogeneous knowledge integration; he has published more than 100 articles in these areas. He has also coordinated the Working Group for the Standardization of Metadata and Semantics in the e-Services of the Italian Public Administration, and the W3C Task Force on Porting WordNet to the Semantic Web.