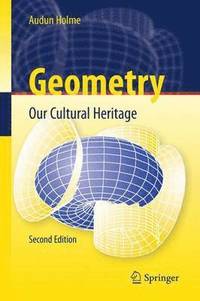 av Audun Holme
Häftad Engelska, 2014-11-28
829
Köp
Spara som favorit
Finns även som
Visa alla 3 format & utgåvor
This is a revised edition of the ?rst printing which appeared in 2002. The book is based on lectures at the University of Bergen, Norway.Over the years these lectures have covered many different aspects and facets of the wonderful ?eld of geometry. Consequently it has never been possible to give a full and ?nal account of geometry as such, at an undergraduatelevel: A carefully consideredselection has always been necessary. The present book constitutes the main central themes of these selections. One of the groups I am aiming at, is future teachers of mathematics. All too oftenthe textsdealingwith geometrywhichgo intothe syllabusforteacher-students present the material in ways which appear pedantic and formalistic, suppressing the very powerful and dynamic character of this old ?eld, which at the same time so young. Geometry is a ?eld of mathematical insight, research, history and source of artistic inspiration. And not least important, an integral part of our common cultural heritage.
Visa hela texten

From the reviews of the second edition: "Devised primarily for future teachers of mathematics, but to be enjoyed by all lovers of geometry, including professional geometers, who will likely find something new in the historical part, this book renders an essential service to the mathematical community by presenting the story of geometry in two equal halves, the first half surveying its history up to Descartes and the second one presenting the version of geometry that emerged from the axiomatic revolution of the late 19th century, with an emphasis on algebraic geometry." (Victor V. Pambuccian, Zentralblatt MATH, Vol. 1202, 2011)

Part I A Cultural Heritage: 1 Early Beginnings.- 2 The Great River Civilizations.- 3 Greek and Hellenic Geometry.- 4 Geometry in the Hellenistic Era.- 5 Arabic Mathematics and Geometry.- 6 The Geometry of Yesterday and Today.- 7 Geometry and the Real World.- Part II Introduction to Geometry: 8 Axiomatic Geometry.- 9 Axiomatic Projective Geometry.- 10 Models for Non-Euclidean Geometry.- 11 Making Things Precise.- 12 Projective Space.- 13 Geometry in the Affine and the Projective Plane.- 14 Algebraic Curves of Higher Degrees in the Affine Plane R2.- 15 Higher Geometry in the Projective Plane.- 16 Sharpening the Sword of Algebra.- 17 Constructions with Straightedge and Compass.- 18 Fractal Geometry.- 19 Catastrophe Theory.- 20 General Polyhedra and Tesselations, and their Groups of Symmetry.- 21 Hints and Solutions to some of the Excercises.- References.- Index