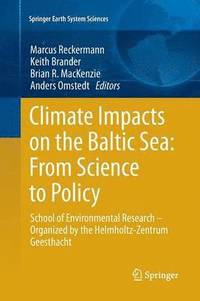 Climate Impacts on the Baltic Sea: From Science to Policy

School of Environmental Research - Organized by the Helmholtz-Zentrum Geesthacht

av Marcus Reckermann, Keith Brander, Brian R MacKenzie, Anders Omstedt
Häftad Engelska, 2014-05-08
1529
Köp
Spara som favorit
Skickas inom 10-15 vardagar.
Fri frakt inom Sverige för privatpersoner.
Finns även som
Visa alla 1 format & utgåvor
The Baltic Sea area is an old cultural landscape with a well developed international framework for monitoring, assessing and managing its marine ecosystems. It provides a good case study for other regions where such management is being set up. The chapters in this book are based on lectures given at a summer school on the Baltic Sea island of Bornholm in the summer of 2009. They cover a range of topics, spanning from detailed descriptions of political agreements that protect the marine environment, to basic modelling instructions, to an assessment of the possible impacts of climate change on the marine ecosystem, to a reflection on the role of climate scientists and their responsibility in society. This interdisciplinary book is primarily directed at students and lecturers of the environmental disciplines to provide an overview of the possible impacts of climate change on the Baltic Sea. It is also intended to serve as a background reference for scientists and policy makers, both for the Baltic Sea area and more generally. The book is a contribution to the BALTEX programme and to the BONUS+ projects ECOSUPPORT and Baltic-C.
Visa hela texten

Bloggat om Climate Impacts on the Baltic Sea: From S...

Marcus Reckermann is the head of the International BALTEX Secretariat at Helmholtz-Zentrum Geesthacht (HZG), Germany. As a biological oceanographer, he has participated in research cruises in the Baltic Sea, North Sea, North Atlantic and Arabian Sea, and published several papers on marine biogeochemistry. His current work involves the editing of scientific books and reports (e.g. the BACC book), and the organization of workshops and conferences. The International BALTEX Secretariat represents the administrative support of the scientific BALTEX community. Keith Brander is a senior researcher at the Technical University of Denmark, Charlottenlund. His expertise ranges from fish population dynamics and fisheries management to plankton and marine ecosystems, with an emphasis on environmental effects. Recent interests are in detecting climate change impacts, resolving conflicting objectives for biodiversity and food production, and helping fisheries and marine ecosystem management to adapt to the impacts of climate change. He was lead author on fisheries and marine ecosystems for the fourth IPCC report. Brian R. MacKenzie is a professor for marine fish population ecology at the Technical University of Denmark, Charlottenlund and at the University of Copenhagen, Denmark. His research interests include natural and anthropogenic (climate change, fishing) effects on fish populations and marine ecosystems. Recently, he has been working on climate change effects on cod and its habitat throughout the North Atlantic, including the Baltic Sea. Anders Omstedt is a professor at the University of Gothenburg, Sweden. His main research interests have been the ocean climate and the physics of ice covered water bodies, in particularly the Baltic Sea and the polar oceans. His recent research work is oriented towards climate change and modelling of coupled physical-biogeochemical systems, including the carbon cycle. He has been involved in the BALTEX programme from its very beginning.