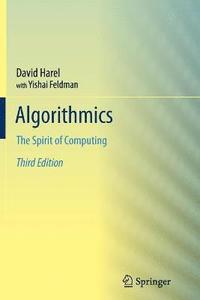 The Spirit of Computing

av David Harel, Yishai Feldman
Häftad Engelska, 2014-04-16
619
Köp
Spara som favorit
Skickas inom 7-10 vardagar.
Fri frakt inom Sverige för privatpersoner.
Finns även som
Visa alla 2 format & utgåvor
Computer science is the science of the future, and already underlies every facet of business and technology, and much of our everyday lives. In addition, it will play a crucial role in the science the 21st century, which will be dominated by biology and biochemistry, similar to the role of mathematics in the physical sciences of the 20th century. In this award-winning best-seller, the author and his co-author focus on the fundamentals of computer science, which revolve around the notion of the algorithm. They discuss the design of algorithms, and their efficiency and correctness, the inherent limitations of algorithms and computation, quantum algorithms, concurrency, large systems and artificial intelligence. Throughout, the authors, in their own words, stress the 'fundamental and robust nature of the science in a form that is virtually independent of the details of specific computers, languages and formalisms'. This version of the book is published to celebrate 25 years since its first edition, and in honor of the Alan M. Turing Centennial year. Turing was a true pioneer of computer science, whose work forms the underlying basis of much of this book.
Visa hela texten

From the reviews of the third edition: "This book should be on any short list for a central course in computer science. It is designed to provide a uniform background on which all students might draw. It has a good-humored, easy style, which would make any reader unwilling to close the book after opening it anywhere. All computer scientists should have this book. ... the bibliography is organized in a convenient chapter-by-chapter form, which makes the book useful for advanced work, and the exercises will help instructors identify capable students." (Harvey Cohn, ACM Computing Reviews, August, 2012) "This is a reprint of the 3rd edition on the occasion of the 25th year of the existence of the book; it is also intended to honor Alan Turing's 100th birthday. ... it is highly readable, even if one is largely acquainted with the field. It is very well written, containing many illustrative examples, suited also for the non-specialist." (Gunther Schmidt, Zentralblatt MATH, Vol. 1243, 2012)

David Harel has been at the Weizmann Institute of Science in Israel since 1980. He was Department Head from 1989 to 1995, and was Dean of the Faculty of Mathematics and Computer Science between 1998 and 2004. He was also co-founder of I-Logix, Inc. He received his PhD from MIT in 1978, and has spent time at IBM Yorktown Heights, and sabbaticals at Carnegie-Mellon University, Cornell University, and the University of Edinburgh. In the past he worked mainly in theoretical computer science (logic, computability, automata, database theory), and he now works mainly on software and systems engineering and on modeling biological systems. He is the inventor of statecharts and co-inventor of live sequence charts, and co-designed Statemate, Rhapsody, the Play-Engine and PlayGo. Among his awards are the ACM Karlstrom Outstanding Educator Award (1992), the Israel Prize (2004), the ACM Software System Award (2007), the Emet Prize (2010), and three honorary degrees. He is a Fellow of the ACM, the IEEE and the AAAS, and a member of the Academia Europaea and the Israel Academy of Sciences. Yishai Feldman received his PhD from the Weizmann Institute of Science in 1986. He was a faculty member at Tel Aviv University and the Interdisciplinary Center in Herzliya. He is now at the IBM Research lab in Haifa, Israel, where he leads research on tools for program understanding and transformation.