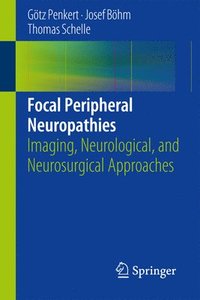 av Goetz Penkert, Josef Boehm, Thomas Schelle
Häftad Engelska, 2014-12-13
1309
Köp
Spara som favorit
Skickas inom 3-6 vardagar.
Fri frakt inom Sverige för privatpersoner.
Every neurosurgeon as well as many surgeons in other disciplines, including plastic and orthopedic surgeons, may unexpectedly be confronted with an entrapment syndrome or a nerve trauma. With a view to preventing costly transfers to expert clinics, this manual for practitioners offers optimized step-by-step figures illustrating how best to approach every relevant nerve lesion. Clear advice is also provided on differential diagnosis from inflammatory neuropathies, which will assist in avoiding false indications for surgery. This is a true manual for practitioners that offers excellent guidance for all surgeons while in the operating theater.
Visa hela texten

Goetz Penkert obtained his MD from the University of Frankfurt in 1973 and later gained his PhD from the University of Hannover Medical School. After working as a neurosurgeon at the Altona Hospital, Hamburg, he joined the Nordstadt Hospital, Hannover, where he served as Vice Chairman and Assistant Professor from 1987 to 1998. Since 1999 Dr. Penkert has been Professor and Chairman of the Neurosurgical Clinic at the Friederikenstift, Hannover. He is a member of the American Society for Peripheral Nerve and is author of Peripheral Nerve Lesions, published by Springer in 2004. Josef Boehm was born in Tirgu-Mures, Romania, in 1960. He has worked at the Neurological Department, Freiberg since 2000, and in 2002 was appointed Chief of the Department. He holds qualifications from the German Neurophysiological Society and the German Society of Ultrasound Medicine. Dr. Boehm is the author of High-resolution sonography in the diagnosis of peripheral nerve diseases, the course book for the 2 Dresden Training Course on Endoscopic Peripheral Nerve Surgery (2007) and Sonography of peripheral nerves - clinical applications (Toshiba, Visions, 2008). Thomas Schelle was born in Wolfen, Germany, in 1969. Since 2001 he has been Senior Consultant in the Department of Neurology, Dessau-Rosslau Hospital, and in 2006 he became an accredited instructor in electroneurography and electromyography for the German Society for Clinical Neurophysiology and Functional Imaging. In 2010 he received accreditation as a DEGUM course instructor for nerve and muscle sonography.