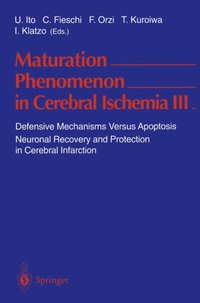 av Umeo Ito, Cesare Fieschi, Francesco Orzi, Toshihiko Kuroiwa, Igor Klatzo
E-bok (PDF - DRM), Engelska, 2012-12-06
1537
Ladda ned
Spara som favorit
Ladda ned och läs i en e-boksläsare. Tips på appar
Finns även som
Visa alla 1 format & utgåvor
The Maturation Phenomenon, described by Ito et al. in 1975 [3) on the basis of his to- logical observations in the hippocampus as well as other portions of the cerebral hemisphere, refers to the hours or days of delay in the development of pathological changes in various parameters of ischemic injury following the restoration of blood flow to the ischemic brain. There is a direct relationship between the intensity of ischemic insult and the speed and rate of maturation of ischemic injury, a lesser intensity being associated with slower and less severe development of the lesions. The delayed neuronal death of CAl pyramidal cells of the hippocampus [8) is a classic example. In the cerebral cortex, with increasing intensity of the ischemic insult, the maturation phenomenon of ischemic injuries intensifies, seamlessly, from less exten- sive to more extensive disseminated selective neuronal necrosis (DSNN), and then further to cerebral infarction upon reaching a critical threshold [1,2,4,6,7). We also have found that following ischemic insults just under the threshold level required to induce infarction, only disseminated selective neuronal necrosis (DSNN) progresses, while following ischemic insults at the threshold level, initially only DSNN develops, followed by the evolution of a gradually enlarging infarcted focus [5, 7). The reporting of this phenomenon boosted research in the field, as it became evi- dent that ischemic damage is not a sudden event, but a process potentially susceptible to therapeutic intervention.
Visa hela texten